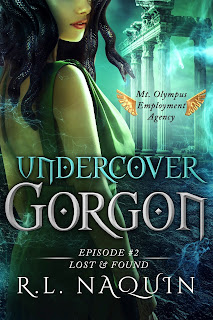 Word is getting around about Patrice’s illegal, after-hours sleuthing. Circe, a fierce and dangerous witch, has lost track of her only daughter and insists that Patrice track the girl down. Patrice can’t refuse the job, since Circe is threatening to rat her out to the bosses upstairs, but at least there’s a large wad of cash involved.

The clues lead everywhere and nowhere, and the search causes serious complications to Patrice’s fledgling romance with a certain blue-eyed delivery guy.

Unfortunately, things aren’t what they seem, and somebody may be pulling a fast one at Patrice’s expense. 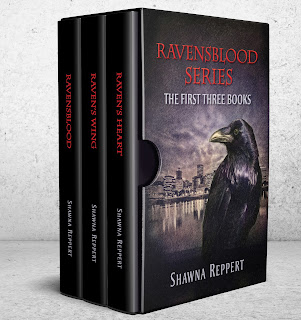 The first three books of the award-winning Ravensblood series are now available in a value-priced e-book 'boxed set!

In a world of impossible choices, where sometimes death magic is the lesser of the evils, can a dark mage find redemption?

Corwyn Ravenscroft. Raven. The last heir of an ancient family of dark mages, he holds the secret to recreating the Ravensblood, a legendary magical artifact of immense power.

Cassandra Greensdowne is a Guardian. Magical law enforcement for the elected council— and Raven’s former apprentice and lover. She is trying to live down her past. And then her past comes to the door, asking for her help.

Ravensblood: Raven discovers that he does have a conscience. It’s rather inconvenient.

He becomes a spy for the council that his master William wants to overthrow, with Cassandra as his contact.

Cass and Raven have a plan to trap William outside his warded sanctuary. But William is one step ahead of the game, with Raven’s life, his soul, and the Ravensblood all in danger. (Gold Medal winner, Global E-book Awards)
Raven’s Wing: Raven must come to terms with both his past and his ancestry. What will be his place in the Three Communities? When he finds himself on the run, trying to find the stolen Ravensblood, the task grows much harder. He must protect the people he has come to care about from the danger of this powerful artifact in the wrong hands, and at the same time prove he is not the thief! (Gold Medal, Global E-book Awards)
Raven’s Heart: Raven has finally found his place in the world. He has a fiancé, friends, and meaningful work. Yet a shadow hangs over it all. William is determined to destroy everyone and everything Raven ever loved.

Will Raven find a way to defeat him, once and for all? Or will he see the life he has built crumble around him as William rises once again to threaten the Three Communities, perhaps even the world?

Urban fantasy set in an alternate-universe version of the Pacific Northwest!

Includes a sneak look at A Hunt By Moonlight, the first book in an exciting new series by the same author!


Buy it on Amazon!

What do you think of our new banner? We thought it was time to refurbish a bit! Our authors span many genres, from paranormal to fantasy to steampunk to science fiction (almost all with romance as a key ingredient), so the wonderful Kim Killion did her best to capture all of that in one panoramic banner - we love it and we hope you do as well. Our thanks to Kim!
******************************

Veronica Scott's Lady of the Star Wind is an All Romance eBooks Top Pick!
The story:

Are they merely luckless lovers … or a legend come back to life?
Mark Denaltieri, ex-Sector Special Forces, has been hired by the Outlier Empress to rescue her granddaughter, Princess Alessandra, from kidnappers. Since the Empress once had him tortured and banished, she’s the last person Mark wants to work for. But he takes the job. He’ll save Alessandra, his first love, and discover why she didn’t speak for him when he desperately needed her. Then he’ll be on his way, finally free of his past.
Alessandra would rather her rescuer was anyone but Mark–after all, he let her believe he was dead all this time. But when the couple are forced to flee her captors by Traveling via a strange crystal globe, they find themselves in a lovely Oasis on a desert planet, the old attraction sizzling between them again.
They soon discover they are far from alone. The Oasis holds the entrance to another world, one in which the inhabitants are convinced Sandy and Mark are the Lady of the Star Wind and her Warrior, come to free them from an evil Queen.


Mark and Sandy must work together to unearth an ancient mirror, and crown the true king of this land.  Can they fulfill the prophecy of the Lady and her Warrior … and this time, will their love survive the test?
Buy Links: Amazon    KOBO     Barnes & Noble     iBooks  All Romance eBooks