Fire Rose, my new paranormal romance novella, is FREE June 7-8, 2016. This is a bonus novella (hence, releasing it free for a couple of days) since it's not part of the The Collegium series which is my focus for 2016. Some stories are just so pushy that they insist on being written!

Actually, I started Fire Rose ages ago. Re-wrote it, re-wrote it again, couldn't find an ending, and then, wham! it all came together.

Double the romance as two couples tangled in a sorcerer’s magic race to save innocent souls from eternal slavery.

In the mountains of Iran, a Persian dragon seduces a recently freed djinni, only to lose his heart; while an American ex-soldier is recruited by the woman he doesn’t dare love to rescue people forced into slavery. 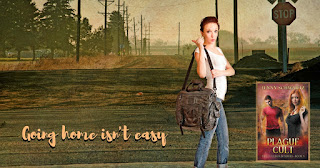 But, as I mentioned earlier, my focus this year is the Collegium series. Plague Cult, the fifth book in the series, is out June 27 and available for pre-order now!

In a small Texas town a desire for love becomes a curse that unleashes a deadly plague.

Ruth Warner is estranged from her family. She loves them, but her magic makes her an outsider in Bideer, Texas. Ruth has built a new life in New York as a healer at the Collegium.
Sometimes, though, you have to go home.
After the local coroner reports a suspicious death, the Collegium’s Chief Healer orders Ruth to Bideer. There’s a new cult in town, a lonely hearts club, and it’s playing reckless games with a death curse.
But Ruth isn’t going home alone.
Danger is in Shawn Jackson’s blood. He is a Collegium guardian, a mage trained to fight evil. He’s also a man accustomed to keeping secrets. He’s a hollerider, a huntsman; one of those who birthed the legend of the Wild Hunt. When he unleashes his magic, terror rides with him.
He’s also Ruth’s back-up.
As evil stalks an innocent town, the dedicated healer and battle-hardened marine must trust their own hurting hearts to prevent a devastating plague.