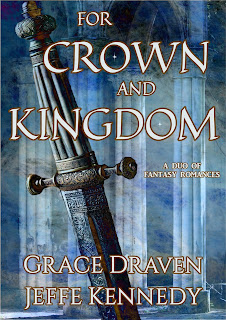 It's been a great week for my duology with Grace Draven, FOR CROWN AND KINGDOM! I'm frankly astonished at the response and grateful to all of you enthusiastic readers. If you'd still like to pick up a copy, here are some linkys:

Now that the promo pony parade is wearing down for both this release and for THE PAGES OF THE MIND, which also released last week to the best rankings that series has seen so far (yay - thank you!!), I'm turning my attention back to book two in this new series I'm writing, The Sorcerous Moons. Book one, LONEN'S WAR, is done and I have an actual blurb now!

Alone in her tower, Princess Oria has spent too long studying her people’s barbarian enemies, the Destrye—and neglected the search for calm that will control her magic and release her to society. Her restlessness makes meditation hopeless and her fragility renders human companionship unbearable. Oria is near giving up. Then the Destrye attack, and her people’s lives depend on her handling of their prince…

A Fight Without Hope

When the cornered Destrye decided to strike back, Lonen never thought he’d live through the battle, let alone demand justice as a conqueror. And yet he must keep up his guard against the sorceress who speaks for the city. Oria’s people are devious, her claims of ignorance absurd. The frank honesty her eyes promise could be just one more layer of deception.

Fighting for time and trust, Oria and Lonen have one final sacrifice to choose… before an even greater threat consumes them all.


Book two is called ORIA'S GAMBIT and it's slow going so far. I'm working hard to keep from hitting Two Towers Syndrome, which is a common pitfall of second books in trilogies.

You know what I'm talking about? It's a common complaint that the second book in The Lord of the Rings trilogy, THE TWO TOWERS, is simply a bridge between THE FELLOWSHIP OF THE RING and THE RETURN OF THE KING. Nothing really happens in the book, except things that fill in from the grand beginning to the crashing finale.

Now, if we can get over criticizing Tolkien, master of all things epic fantasy, we can take a look at why the book feels this way.

Something I like to do to create a scaffolding for my novels, given that I'm much more a gardener than an architect - so this is more like a trellis for the story vine to grow on - is to break down into the three-act structure. This is a natural storytelling structure for most of western culture, hearkening back to the Greeks.

This matches the perhaps more familiar structure of introduction, rising action, climax, falling action. Or get your heroine up a tree, throw rocks at her, get her down again.

Of course there's variation in there, but it's remarkable to me how closely my major beats hit this scaffolding. It helps me because I know I have to have all the stakes set by the first 25%, a big pivot around 50%, a huge all-is-lost climax at 75% and then the final climax.

Okay, so! Now's where it gets fun! (If you're a geeky, spreadsheet queen like me.) You can apply this same math to the arc of a trilogy. Let's say you have three books, all 100K, for ease of round numbers. The numbers in parentheses are the running sum of the wordcount for the entire trilogy.

With me so far? Then we paste this against the three-book story arcs:

See what we did there?? Hopefully you're getting excited and the lightbulbs are going off in your pretty heads. So, looking at the overall arc, the Act II all-is-lost climax of book one is the Act I climax of the trilogy. We spent basically the first 75% of book one setting up the stakes for the entire trilogy! Then the Act I Climax of book three is the Overall all-is-lost moment. Book three also contains the overall Act III Climax. This can move a little to coincide with the book three Act III Climax for even more punch. Or, often there's a series of climaxes in book three, to wind everything up.

But let's look at The Two Towers syndrome. What happens in the overall arc in book two? Right! ZERO CLIMAXES. Basically the book is one big midpoint, all-is-lost moment, so far as the overall arc is concerned. *This* is why the middle book of a trilogy can feel like a bridge. It kind of IS.

What are some solutions to this? Well, one that works well is to make book two longer. If book two is 125K, then the Overall Act II Climax can occur at the end. Though this can create a cliffhanger. The other solution is to be very aware of this syndrome and make the act climaxes particularly powerful. The book gets no help from the overall arc, so needs a strong momentum of its own. Resist having the quest team be split up, wandering about having various incidental adventures. *cough*

Any other solutions?? I'm all ears as I dive back into ORIA'S GAMBIT. One big midpoint... yeah.