FROM THE ARCHIVE: Ten Things About Steampunk


Veronica sez: A fun Archive post about Steampunk which is just as true today as it was when Cindy first wrote it! And she's still very much into the genre as you'll know if you follow her Facebook posts. Please enjoy!

1. Detroit is a rocking awesome city for steampunk. Something about the urban decay around us, really promotes the steampunk/diesel punk feel. Also, most of the people I’ve met are generous, fun and really come together to help one another out. 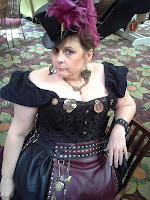 2. Steampunk is welcoming to all ages/races/lifestyles/professions and incomes. The spouse and I even get to hang out with our grown kids, which is all kinds of cool. Moreover, if you’re not model-thin, young, and breathtakingly lovely, you’ll feel like it in a well fit corset and crinoline. Seriously. I was a major camera-phobe before I started garbing. Now I mug for the camera with the best

of them. Sure, I avoid certain styles, like corset-mini-leggings-stiletto boots, and opt for clothes with more coverage, as suited to short, round, and middle-aged. But I still feel so good in my favorite garb. It’s really revived my flagging confidence.

3. Steampunk is a big sandbox. One of my favorite things so far as I journey into the steampunk world is discovering that the fandom is full of intelligent adults who understand that their steampunk adventures are for fun. Life is hard. Recreation shouldn’t be. They’re playing, and they want you to have fun too. The best folks I’ve met are fine if your costume is a different era from theirs, or your ideas of the technology or aesthetic are different. They understand that there’s room for everyone to have their own kind of fun. 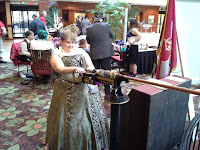 4. Steampunk may have started as a fiction genre, but it’s become a primarily cosplay fandom. In other words, lots of people who identify as steampunks, don’t read. (I don’t mean they’re illiterate—I mean they don’t read speculative fiction for pleasure.) So the steampunk community and steampunk readers don’t overlap as much
as one might hope.

5. There is a bigger crossover in the community between Steampunk and Renaissance faires than there is between steampunk and SF con fandom. Costuming seems to be the link, more than the fiction. Find steampunkers at your local Ren Fair, SCA event, belly dance troupe or LARP, if you’re looking for folks who know their goggles from their ray guns. 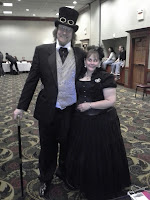 6. Steampunk fiction is able to break the rules of history, but you still need a consistent timeline. My most important tool is the concept of the butterfly effect. Once you’ve made changes to the basic timeline of the world, you have to look at every element you create and decide how those elements are modified (or not) by the differences between your universe and the one we live in.

7. That means I do a LOT more research than you’d think for someone who essentially makes stuff up for a living. I have to know exactly how things work before I can muck with them. That’s sometimes big, easy stuff (When was Queen Victoria on the throne?) to little stuff like the newspaper descriptions of the Crystal Palace Exhibition in 1851, to legal matters, like Scottish witchcraft laws and when women were allowed to own property. 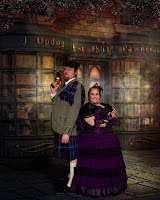 8. Steampunk requires mixing punk into your steam. Seriously. If you just add tech to your Victoriana, it falls a little flat.
Without a subversive, even tongue-in-cheek element to the feel, it’s still alternate history, or gaslamp fantasy, or any number of related things, but to really get the feel, you need the punk. Often, this means adding modern social consciousness, such as civil rights and environmentalism—and sometimes devastating effects of ignoring those two. Think about WHY you’d need gas masks in an even more coal-powered 1890s London.

9. In an era when diversity was considered bad etiquette at the very least, it’s easy to write about snowy white characters and ignore everyone else. This is particularly true if your book is set in Britain or New England. Even if your world-building doesn’t provide a reason for introducing unexpected diversity, do it anyway. It’s not like gays didn’t exist—they were just closeted by force. But why not be open within their families and friends? Also, folks did move around. Bring other races in, but be sure not to make them all servants, etc. It may not be strictly period, but it will make your story a whole lot more interesting.

10. Finally, I’ve learned to let my imagination soar. Nothing is entirely out of the question in a steampunk/fantasy crossover world, so anything I can imagine is feasible, if I can figure out how to work it in. This has truly made steampunk more interesting than anything else I’ve ever written. It may not be the bestselling genre on the market, but I remain convinced that it’s the most fun.

Cindy Spencer Pape is the author of the award-winning, best-selling Gaslight Chronicles. For more information on Cindy or her books, visit her website or find her on Facebook or Twitter (@CindySPape).