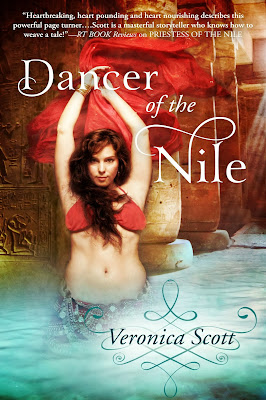 DANCER OF THE NILE
from Veronica Scott

Egypt, 1500 BCE
Nima’s beauty and skill as a dancer leads an infatuated enemy to kidnap her after destroying an Egyptian border town. However, she’s not the only hostage in the enemy camp: Kamin, an Egyptian soldier on a secret mission for Pharaoh, has been taken as well. Working together to escape, the two of them embark on a desperate quest across the desert to carry word of the enemy’s invasion plans to Pharaoh’s people.

As they flee for their lives, these two strangers thrown together by misfortune have to trust in each other to survive. Nima suspects Kamin is more than the simple soldier he seems, but she finds it hard to resist the effect he has on her heart. Kamin has a duty to his Pharaoh to see his mission completed, but this clever and courageous dancer is claiming more of his loyalty and love by the moment. Kamin starts to worry, if it comes to a choice between saving Egypt or saving Nima’s life…what will he do?

Aided by the Egyptian god Horus and the Snake Goddess Renenutet, beset by the enemy’s black magic, can Nima and Kamin evade the enemy and reach the safety of the Nile in time to foil the planned attack?

Can there ever be a happy future together for the humble dancer and the brave Egyptian soldier who is so much more than he seems?

Many of the Here Be Magic authors have been participating in the online CoyoteCon panels over the past two weekends. If you've missed any of the sessions, the transcripts are terrific. Sessions on audiobooks, worldbuilding, self publishing, LGBTQ, Magic in Paranormal, Steampunk, Science Fiction Romance, Epic Fantasy, Angels & Demons...hop over and check it out!

Speaking of Coyote Con, join us for our second Movie Slam this Saturday at 9 p.m. EDT. Details are at www.CoyoteCon.com 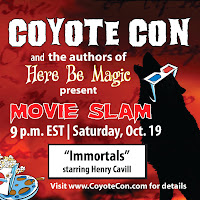 Fantasy Books at Carina Press are still 20% off this month!

Will there be another X-Files movie? Stars David Duchovny and Gillian Anderson hope so.

Win-A-Book Winner!
Congratulations to Barb Taub, who won a free copy of David Bridger's new YA-steampunk book! David will be contacting you shortly about your prize.

Check back each Wednesday for more book giveaways.