So Much Magic, So Little Time

Posted by: Jody W. and Meankitty 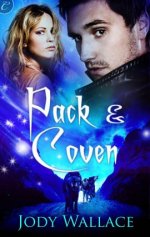 Magical systems in various fantasy novels I've read would make for a fascinating academic case study. Some systems involve elements. Some involve wands. Some involve lots of mumbo jumbo. Some involve extensive schooling at places like Hogwarts. Because I'm lazy, though, today I'm just going to talk about my own magical system in the world of Pack and Coven (Carina 2012) and Witch Interrupted (Carina 2014).

In these two romances, the primary supernatural species in my world are witches and wolves. No demons or mages or elves or unicorns or invisible men or what have you -- just witches and wolves. There's something special about the two species, which I don't want to spoil for people who haven't read the books, but it's probably pretty clear that the magic users are the witches.

When a writer develops a magic system, she has to ask herself a lot of questions. What magical skills do the practitioners actually have? How do they get juice for the spells? Are they born with it or is it Maybelline? What about training? Can they write books faster and better with it? Heal the sick? Can they convince their kids to clean their rooms? And, always, what are the downsides and limitations to using magic? Magical systemization is a subject that has been extensively discussed in the publishing world, and rather than recreate the wheel, I'll share a bunch of links from some well known and less well known sources:

But. I was talking about MY magic system, wasn't I?

After much deliberation (okay, after about twenty minutes), I decided that my characters' magic would be plant based. Their power would come from inside themselves, to varying degrees. To shape the power inside themselves into something magical, my witches funnel their power through these organic components, giving the power shape and purpose.

To research, I bought a bunch of magical herb books, wild plant guides, and things like that. I read up on gardening, prices of spices and herbs, and tea blends. Some of the books listed historically consistent uses for herbs and plants while some had stuff in them that seemed as made up as -- my books! (http://www.amazon.com/Cunninghams-Encyclopedia-Magical-Herbs-ebook/dp/B007SNROEC/)

The material I researched added a great deal of complexity and consistency to my basic magical system. While I didn't restrict myself to the information in the books any more than I restricted myself to real Wiccan witches (nope, my witches are as made up as my magic), the herb books made for interesting reading, and I found myself buying more tea as a result.

My tea stash doesn't have a magical effect on anything but my counterspace, but it's definitely a side effect I have enjoyed.

What's your magic like? What's your favorite fictional magical system? What are some common things you see as well as some unique things you might have seen in your reading?