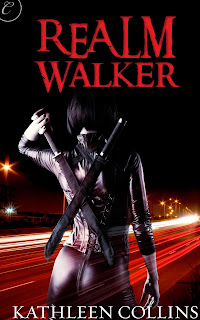 An estranged mate, a mangled body and a powerful demon who calls her by name…
As a Realm Walker for the Agency, Juliana Norris tracks deadly paranormal quarry using her unique ability to see magical signatures. She excels at her job, but her friends worry about her mysterious habit of dying in the line of duty without staying dead. That's only the first of her secrets.
Most people don't know Juliana became the mate of master vampire Thomas Kendrick before he abandoned her seven years ago. Most people don't know the horrors she endured at the hands of the vampire he left in command. Most people don't know her true parentage, or why a demon on a world-threatening rampage has taken a personal interest in her…


Even as Juliana pursues the demon, it goes after all she holds dear—including Thomas, who is back to claim her for his own. But if she can't reconcile her past and learn to trust herself again, she will lose him forever.
About the Author:
Kathleen Collins has been writing since Kindergarten. And while her ability has drastically improved, her stories are still about monsters and the people who play with them.
The rare instances that she actually finds some spare time, she spends it playing with her two boys. Three if you count her husband.
Excerpt:
The click of the mechanism echoed through the alleyway. She eased the door open and stepped inside. Soft lights illuminated the hallway, giving her just enough light to see and casting just enough shadow for something sinister to hide in. She listened for any sound to indicate she wasn’t alone. Nothing.
Stairs ascended into the darkness at the end of the hallway. She kept her back to the wall as she eased toward them, checking doors as she passed. All locked. She wasn’t going to take the time to unlock and search rooms. Her target would vanish from the roof long before she arrived if she stopped to check every office on the way up. She continued to scan for signatures with her gift.
She reached the stairs and started up, ignoring the paranoia that swamped her at leaving her back exposed to the blackness below. She was too old to be afraid of the dark, or at least too old to admit to it. At every landing, she paused to listen for any sound. Nothing but her own breathing reached her ears. When she reached the access door for the roof, she ran her fingers over the lock, willed it to let her pass.
She opened the door trying to make as little noise as possible and quickly realized she needn’t have bothered.
An insect-like fae with skin the color of moss sat cross-legged in the middle of the roof watching the door. Small in stature, almost the size of a child, the fae possessed a set of four emerald green wings. It lacked any sort of signature.
The door shut behind Juliana and she took a deep breath. Cinder and ashes. Fear settled in her belly like a lead weight
“Hello, Hound,”