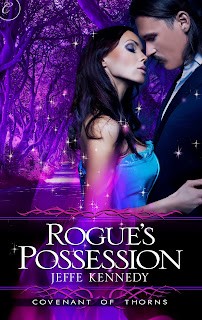 First of all, happy birthday today to Veronica Scott, fondly AKA "Calendarzilla" for this blog. What would we do without her?

Flounder helplessly, I feel sure.

This is release week for me!

The second book in my Covenant of Thorns trilogy, Rogue's Possession, came out from Carina Press yesterday. This is my first sequel - the continuing story of the adventures started in Rogue's Pawn - and it's been a whole new, thrilling experience to have readers excited for the release. Already the book has been listed on October "Must Have" lists and early ratings on Goodreads have it at a perfect five stars.

(Of course, that's from four, die-hard fans and I don't expect it to last, but for now it's all pretty and pristine.)
For those interested, a bit of a blurb:

A human trapped in the world of Faerie, in possession of magic I could not control, I made a bargain for my life: to let the dangerously sensual fae noble known as Rogue sire my firstborn. And one does not break an oath with a fae. But no matter how greatly I desire him, I will not succumb. Not until I know what will happen to the child.

Though unable-or unwilling-to reveal the fate of human-fae offspring himself, Rogue accompanies me on my quest for answers. Along the way he agrees to teach me to harness my power, in exchange for a single kiss each day and sleeping by my side each night. Just as I am about to yield to temptation, I find myself in a deadly game of cat and mouse with an insane goddess. Now my search for the truth will lead me to the darkest of all Faerie secrets.
And, just for fun, an excerpt!

In Which I Accomplish Several Impossible Things before Breakfast

Negotiation is the science of the fae culture, providing the guiding precepts for all actions. Virtually nothing is offered without a price attached. Conversely, nothing can be taken from you without appropriate payment. Pretty much.

We were late to the battle.

As I’d been promised, the Promontory of Magic enjoyed a spectacular view, though I wasn’t there to sightsee. The finger of rocks thrust well out into the ocean, the water the unnatural blue of a resort hotel pool, despite the thunderous surf and driving rain.

Below, two fleets of sailing ships exchanged fire. They were conveniently arrayed on each side of the promontory, flanking me as if I were a Wimbledon line judge sitting at the net, ready to call faults and points. Except my power was even greater.

I would decide who lived or died.

Whether I wanted to or not.

My hair lashed against my cheeks, stinging me, and I pulled up the hood of my cloak, grateful for its warmth. A gift from Rogue, the cloak magically repelled water. Despite all I’d learned about controlling and stabilizing magic, Rogue’s abilities far exceeded mine. The scent of sandalwood teased me, bringing up warm and sensual memories of his devastating kisses. Rogue managed to be both the bane of my life and the addiction I couldn’t seem to shake. My life had become irretrievably intertwined with the fae lord’s, though I hadn’t seen him in days. His absence made my heart that much more vulnerable to the longings he stirred in me. I tucked them away, where they wouldn’t distract me.

“Which side is ours?” I asked.

My fae companion, Puck—a vision in celadon polka dots that clashed quite alarmingly with his strawberry blond locks—gave me a goggle-eyed stare, as if I’d asked which way was up, and pointed at the left side. Good thing I’d asked—I’d thought maybe it was the other. One of the many disadvantages of being a human in Faerie was missing out on their hive-mind shared understanding.

“It’s a fine day for a battle!” Puck gazed out over the ships with a gleeful expression and I tried to fake the same enthusiasm, despite the dread in my heart.

Of course, every day in Faerie was fine, in a purely aesthetic sense. The sun, which shone most of the time, did so with lustrous brilliance in depthless skies. The grass glowed an emerald green Oz would have envied. Even the rain shimmered like effervescent and musical drops of platinum.

Don’t wish you were here.

In a place like Faerie, the pretty merely masked the reality, which could be horrible indeed. I hadn’t liked my university job as a neuroscientist in the physiology department back in Wyoming, but being employed as a war sorceress sucked far more. Forget the glam sound of it—killing people at someone else’s whim whittled away your humanity in hateful bites. Compared to that, my old tenure committee seemed like amateurs.

“You recall your instructions?” Puck bobbed his head as he spoke, encouraging me to agree.

Puck cocked his head, puzzled, and I knew my idiom hadn’t quite translated. Usually my intended meaning got through just fine via the telepathic network, but sometimes, particularly if I didn’t pay attention, my good old American English slang created strange images in the fae mind.

Some gaps could never be bridged.

“Yes. Darling will inform me of the moment and I will sink exactly half of the enemy ships.” I sent a questioning thought to Darling, my cat Familiar, to make sure he was still on board with the plan, especially since he provided my only long-distance communication access. When he felt like it. Imagine a cell phone company run by kittens.

“It shall be a battle to go down in history! Victory shall be ours!” Puck galloped off, leaving me alone with Darling’s grumbling narrative in my head, which roughly translated as bored, bored, bored.

Darling had become my Familiar largely in a quest for adventure, and being stuck with the generals at battle HQ so he could relay information to me annoyed him to no end. He wanted real action. Sometimes his thoughts came across with a disconcerting manly point of view—especially since he communicated mainly in pictures and feelings. He also suffered from delusions of grandeur.

I had bigger problems, however. The terms of my indentured servitude to General Falcon as pet sorceress in his war dictated that I do as he instructed. The arcane rules of bargaining in Faerie gave me something of an out—as long as I stuck to the letter of our agreements, I could skate around what he really wanted.
In this case, the drowning death of half the humans in the opposing army. Or navy, I guess.

I sure as hell couldn’t drown a bunch of innocent humans. The fae might regard their lives as disposable, but I knew the men on those ships had no more choice—or stake—in Falcon’s ridiculous war games than the wooden vessels themselves. Rogue had warned me I’d face this moment if I chose to honor my servitude instead of running off with him. Since I hadn’t been eager to exchange my status for an even more questionable one with Rogue, I was well and truly stuck.

Don’t think about him.

A white slice of anger at my current predicament flared in me. Something sharp and alien enough to take my breath away. I shuttered my mind, thinking it came from elsewhere, but it continued its headlong race through my heart and disappeared again, leaving me rattled. This wasn’t the first time I’d felt it since the last battle—like the remnants of a fever dream after you’ve awakened. I wasn’t sure what it meant, but I knew giving it attention was probably a bad idea.

Instead I concentrated on my goals for the day:

Jeffe lives in Santa Fe, with two Maine coon cats, a border collie, plentiful free-range lizards and a Doctor of Oriental Medicine. Jeffe can be found online at her website: JeffeKennedy.com or every Sunday at the popular Word Whores blog.

She is represented by Pam van Hylckama Vlieg of Foreword Literary.