Very few things get me more excited than books and food. Seriously, half the people I follow on social media are authors or passionate reviewers. The other half are interesting eaters and/or experimental cooks. A few are both, and I swear, if smartphones took it to the next level and allowed me to “sample” the foods these people tweeted about, well…let’s just say that nobody would ever ask to borrow my phone.

When I started writing RUNNING IN THE DARK, I knew that I had a lot of research ahead of me. I whimsically (okay, there was a reason for it, but at the time I didn’t know I was writing a sequel, so it was mostly whimsical) sent my characters off to Chile. The problem with that? The next book had to be set in Chile and I’d never freaking been to Chile. Hell, I’ve never been to South America. My travels – extensive though they may be – have been firmly grounded in the Northern hemisphere.

So I researched, but not a “now I shall sit down with an Atlas and encyclopedia and take notes about land mass and major exports” kind of research. It was a guerilla affair. I surfed public transportation sites and local community concern blogs. I scrolled through photos and videos posted by people who’d recently traveled to Santiago. I watched music videos by local bands. Seriously, while I normally caution people about performing Internet research, this time the Internet was an amazingly source of Genuine information.

It wasn’t genuine in that it was all true. A few of the “facts” relayed in the travel journals turned out to be incorrect. Sometimes people mixed up the names of neighborhoods or foods or roads. But their feelings about adventuring into this new and wonderful place were genuine. And, because everybody has to eat, food is one of the first steps that visitors take into a new place. The language might be difficult, the streets tough to navigate, the customs strange, but good food is always good food.

I love the stories that regional cuisine tells. Though food we discover what lives outside the cities we visit, which particular kind of grain or variety of squid. We taste the multitude of cultures that have grown out of, landed upon or merged into a specific area.

So, basically I spent a week surfing pictures of and recipes for empanadas (is it possible to gain weight by looking at pictures? I swear I did.). Then I read encyclopedic entries on “proper” Chilean cuisine, after which I surfed menus at restaurants in Santiago to determine what dishes were actually available or appeared to be popular.

RUNNING IN THE DARK isn’t a food journal. The main character, Sydney Kildare, doesn’t have a lot of time to sit down and enjoy a meal and she’s not much of a cook. But, in the background of the story are the flavors and spices of the city. And, seriously, if I ever get the opportunity, I’m going to Chile, fork in hand.

What are your favorite eating destinations? Are you able to bring the recipes home, to recreate the feeling of your adventures? 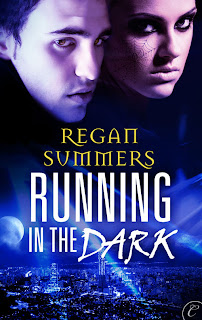 After surviving a vampire turf war in Alaska, vampire courier Sydney Kildare is back behind the wheel and working under an assumed name in Chile. She doesn't speak the language, doesn't know the city and—worst of all—has to drive a crappy car.

What she does have is Malcolm Kelly, her sort-of boyfriend and manager of the city's vampire population. But with Malcolm preoccupied by bloodsucker business—and a gorgeous vampiress from his past—Sydney feels more alone than ever.

But Sydney has more than her love life to worry about. She's got vamps on her tail, mysterious deliveries that leave death in their wake, and old enemies targeting her to get to Malcolm. Turns out he's got a history more deadly than she ever imagined, and she'll have to use every skill in her arsenal to stay alive...

Regan Summers lives in Anchorage, Alaska with her husband and alien-monkey hybrid of a child. She is a huge fan of the low profile. She likes books, ottomans with concealed storage, small plate dining, libraries, Corporal Hicks, some aspects of pre-revolutionary France, most aspects of current Italy, and books.

Her Night Runner series, including Don’t Bite the Messenger and Running in the Dark, is available wherever e-books are sold.