Dark Dealings and playing with the other couple 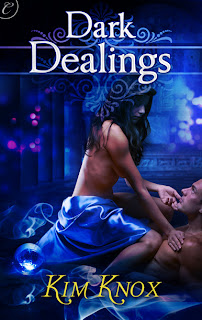 Dark Dealings was born as I watched Rosencrantz and Guildenstern are Dead.
As I was admiring the young and yummy Mr Oldman and Mr Roth, the idea percolated of playing with characters who were in the background. You know the ones. When the hero succeeds, his sidekick isn't quite so lucky, or a heroine's friend who's always so unlucky in love and when the heroine gets her man, her friend is the example of how love fails.
I decided to ditch the perfect couple and play with the other two. The jealous woman and the jilted man who had both been abandoned when the 'perfect couple' found each other.
Oh and I added in a whole heap of magic, mysterious deaths and an odd couple who might turn out to be perfect for each other... *grin*

Ava Kalle's empty soul devours magic. And her hunger is deadly. She's sharp, quick and can live in shadow, making her work as a spy for the Mages a natural choice. She lives on the fringes of society and likes it that way.

When the man she loves takes another woman for his mate, the darkness in her heart unravels and she'll do anything to get him back. She makes a dangerous deal with a fire elemental, Heyerdar, who has a vested interest in agreeing: together they'll use forbidden magic, harnessing their sexual energy to drive the couple apart.

But soon their pact pushes them both into a dark sexual obsession. One that Ava may not be able to control…
Carina Press || Amazon US || Amazon UK
Amazon de || Barnes and Noble || ARe

She had to stare at them again. She didn’t want to, but the pull was inexorable. The pair courted imbalance. Magic was finding the perfect harmony, perfection in opposites. Reist had to know that. Had to feel it in his soul like she did. Higher mages did not fuck within their caste. Yet there he was, in full view of everyone and for the past month, taking Fallon to his bed. Their powers were too similar. Whereas hers...

Her attention jumped to the left, the sudden pull in her senses warning her that another magician had entered the wide hall. Whoever it was prickled her skin. Ancient power, pulled from the earth, from the fire of the sun, licked across her empty soul. Panic hit her and she shrank back against the stone. Elemental magic. She swallowed. Heyerdar.

He was there in the shadow of a side room archway, the burnished breastplate of his senior captain’s armor catching the glints from sconces on the wall. He watched, as she’d watched. His face was bleak, no emotion, just the hard frown that was his mouth regardless of his mood. His meaty fist clenched and reclenched the pommel of his sword.

A heartbeat later he turned away and disappeared.

Ava blinked. Now she’d witnessed it herself. This was Heyerdar. The Left Hand to the Emperor. The man who would take a body apart if he thought someone looked at him the wrong way. Yet...he had walked away. Why?

She closed her eyes, focusing on the brief brush of power that had skittered across her soul. Her heart beat slowly, and the dark calm at her heart grounded her, prepared her. Here was magic to taste. It poured from Heyerdar in waves.

She put her fingers to her lips as her mouth ached to part. The craving deepened and she denied herself the easy path of eating flesh. With her mouth shut, it was as if the magic was pulled towards her, drawn by the void within her. Magic pressed against her skin, surrounded her and slipped, hot and delicious, through to her greedy soul.

Ava pulled apart the lick of his bitter magic, finding the shadow of the man within. As the brief flare of it fed her emptiness, her breath caught. Emotion rocked her. Fury and pain hit her hard in the chest, echoes of other emotions fizzling away.

Heyerdar was a riot of hatred. He wanted Fallon, and Reist had stolen her. Something held him back, but the sliver of magic that had touched her wasn’t enough to reveal more of his thoughts, his soul. Years as a spy for the mages had honed her curiosity. Did the new Highest Mage have something over him?

Ava wiped a hand across her mouth. The test was over. And the little book had revealed a truth. She could take power without devouring the host’s flesh. It had also brought her something else. A new plan.

Heyerdar wanted Fallon as she wanted Reist. His pain was as sharp as her own. There was a deal to be done. Heyerdar was elemental. He didn’t follow the strict rules of high magic. He never would. So what she had to offer—the way they would both have what they wanted—wouldn’t have him screaming for the ruling mage to throw her out of the Institute.

Kim Knox
I live on an ancient boundary line, once marked by a Neolithic burial tomb. The tomb’s now a standing stone circle–thank the Georgians for that one–and stirs my mind with thoughts of history and ancient myths.

I mix the essence of the past into fantasy, along with the essential mix of magic and sex. I also write science fiction romance, pushing out into the far future with effortlessly sexy men and the women who can’t resist them.

And I have a new blog at Wordpress: Both my blogs will take you there... but if you don't want that 5 second wait...here's the address: www.darknessandromance..com