Discovering the story, the Panster way

Posted by: Tia Nevitt
I was watching some reruns of ONCE UPON A TIME with my daughter and we got to the point where The Stranger arrives with an old wooden box strapped to his motorcycle. I said to my husband, "I bet those series writers didn't have the foggiest idea what was in the box when they wrote it in."

Maybe they did. Maybe they are plotsters and not pantsters, like me. Have I ever thrown something into a story without having the faintest clue how it would turn out? That's basically how I do it. In my upcoming Accidental Enchantments story, The Magic Mirror and the Seventh Dwarf, I decided to put the prince in the magic mirror. And then I started writing to see how it would turn out.

When I wrote The Sevenfold Spell, I kept having to close all the plot-holes that were in the original fairy tale. Why could each fairy only cast one spell upon Aurora? Why could the evil fairy’s spell not be undone? Why a hundred year sleep? And why would Aurora go anywhere near the spinning wheel? 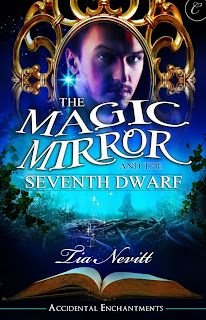 Snow White and the Seven Dwarfs is a very straightforward story, with few plot-holes. Some plot conveniences, maybe, but very few things were left unexplained. One thing that was unexplained was the origin of the creature in the magic mirror. I thought it would make an interesting triangle if I made him the prince. Who, of course, finds the evil queen the fairest one of all ... until he meets Snow White.

Another mystery is that of the seven dwarfs. Why would seven dwarfs choose to live together? I came up with an answer based on deaf communities. I used to live in the midst of one. I figured that if deaf people form communities, why not little people as well? Well, it turns out that they do. I didn't think it would be a huge stretch to put them all on a farm, which is owned by a very short man (not a true dwarf) and his wife, who has achondroplasia. Naturally, word gets about and other people join them, mostly men to work the farm.

And then Gretchen comes along.

Another thing that came out of the blue was my own twist on the Neibelung story. Here is an excerpt from the story which kind of gives away one of my favorite parts, but maybe it will make you want to read it. It begins just after one of the dwarfs, Lars, bathed by himself in a river near the farmhouse. Ange is a runaway princess, filling the role of Snow White.


When Lars was reasonably dry, he dressed, grabbed his wet clothes and headed back to the house.

Just before he reached the farmhouse, Gretchen stepped out of the shadows. He stopped.

“I…I just wanted to thank you,” she said, wringing her hands in nervousness. “For your compliment and for defending me.”

For a horrified instant he wondered if she had seen him out in the river. But he quickly dismissed the notion. Of course she would not have done such a thing. He suspected she was very proper. Following him out to the river and spying on him while he bathed would be totally unlike her. She would be aghast that he’d ever suspected her of such a thing.

“You didn’t deserve any of that,” he said. “It was natural that I defend you.”

“Still, I wanted to thank you.”

She nodded and then turned stiffly and walked back toward the farmhouse. She certainly seemed more awkward than usual. It must have been because they had been rather alone out there together. Mindful of her sense of propriety, he waited a moment so they would not be seen walking in together, and then he followed.

“You did what?” Ange exclaimed.

“I, um, followed Lars when he went to the river, and I—” Gretchen gulped, “—I spied on him while he bathed.”

Ange stared at her with her mouth wide open. “Why would you do such a thing?” she whispered.

“I don’t know!” Gretchen whispered back. “I was in the middle of it before I knew what I was doing. Dieter almost caught me!”

“You’d have been thrown out!”

“I know!” She grabbed her temples. “I don’t know what came over me. It was like an…an overwhelming curiosity.”

Ange just started at her for a moment. “Well?”

Gretchen blinked at her. “What did I see?”

“Everything! That’s what I saw!” She waved her hand toward the window. “The sun wasn’t finished setting, and moonlight out there is quite bright.”

Ange continued to gape at her. “You little hussy!”

Gretchen threw herself down on the pillow and moaned into it. “I know. I’m such a tart.”

Ange began to laugh. “So what did he look like?”

She paused for a moment. Then she lifted her head and said, “He was like one of the immortal Nibelung, arising out of the depths of the earth through a passage in the river after adding to his hoard of gold.”

Gretchen looked at her askance. “Not to a dwarf maiden. They were the heroes of the story, challenging the gods. They even won, after a fashion.”

“But surely they were evil?”

“No. Misunderstood, only. Besides, was it not their gold? Weren’t the supposed heroes of the legends actually the thieves?”

Ange laughed. “I suppose they were.”

Gretchen sighed. “I used to love the stories of the Nibelung.”

Ange grinned. “And now, you might have one of your very own.”

Gretchen dived under her pillow.

The Magic Mirror and the Seventh Dwarf will be available in February. The Sevenfold Spell is available now. To learn more about either, please join me at my website at www.tianevitt.com.

Tia Nevitt
I am an author and a blogger. My fairy tale retelling, The Sevenfold Spell, is out right now at http://tiny.cc/sevenfoldspell. Plus, I review first novels (mostly) at Debuts & Reviews. Please see my website for more details about both!