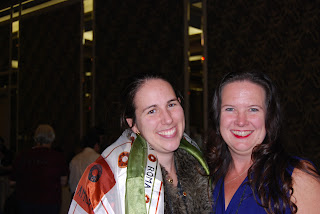 Here's me at the World Fantasy Convention 2012 in Toronto. I'm still kind of reeling from it - and from the week spent on day job work immediately afterwards - but this seems like a good time and place to deconstruct.

I've been to a lot of writer conventions and book festivals. They run the gamut from very small and intimate retreats to the enormous Romance Writers of America (RWA). Some are all about writing and only writers attend, others are mixes of industry professionals and writers, still others mix in readers and the book festivals are mostly readers. I've also been to arts council-sponsored conferences that tend to be all about Literature with a capital L and to ones like the Romantic Times con, which is gleefully about genre.

World Fantasy Con was an experiment for me. In recent years, I've been focusing heavily on the romance conventions - both reader and writer-focused. With the release of Rogue's Pawn, which is a Fantasy Romance, I wanted to reach out more to the fantasy community. So, this was me dipping my toes in the water.

The Here Be Magic authors dipped along with me, all chipping in for a spread on the inside front cover of the program.(It was less pink than this in reality...) 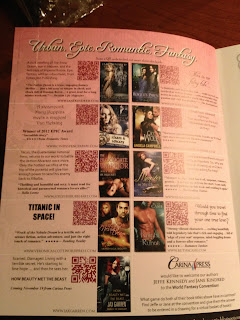 So: what did I think?

This conference definitely fell close to the "all about writers" end of the scale and much more heavily on the Literature side than I expected.

The plus on this was that the panels and discussions were extremely high quality. I attended something in nearly every time slot, which has become unusual to me. The featured authors were each given a one-hour time slot where they were interviewed and then took questions from the crowd, kind of like Inside the Actors Studio. I would love to see RWA adopt this method instead of the "author chats." I, myself, was somewhat randomly selected (ahead of time, to be sure) to moderate a panel of what turned out to be phenomenal authors and an energizing, fascinating topic. The panelists were Graham Joyce, Holly Black, Karen Dales and Sean Williams (more on him below). I'm buried in reading Graham's book Some Kind of Fairy Tale and loving it.

The downside was that this felt like a far more clique-ish conference than many I attended. Of course, I was New Girl, so I didn't know very many people, but the gathering felt more tiered than most. One guy gave me the cut direct - actually turned away and started talking to someone else while I was in mid-sentence - demonstrating vast disinterest in whoever the hell I might be. Other people were just lovely, but overall it felt far less convivial than the gatherings of romance writers - who I've come to believe are the most generous and convivial of all writers. Just my take on that.

I did end up hanging with a contingent of fine folks from Adelaide, Australia. Sean Williams - a terrific guy and excellent writer who was on my panel - introduced me. His books have been less available in the US, but the e-book thing is changing that. I love to see the world getting smaller that way. Another gal from Adelaide was Emily Craven, (@theebookguru) in the pic with me above. She was on a panel about e-publishing (which was overall quite astonishingly far behind the times) and said some smart things. She's planning to interview me soon, which should be fun. I really look forward to expanding the connection with our Aussie neighbors.

I won't shell out the considerable bucks it would cost to go to the con in Brighton, England in 2013. But WFC14 returns to North America the following year, to D.C. Right now, I'm planning to go! Anyone else?