Arguably, however, Paul's death in Ashes of the Day was the hardest for me to write. Paul was a sweetheart. A human with a not-quite-requited passion for a vampire several hundred years old. It was doomed from the start.I struggled for ways to keep him alive, but as Paul was as much in love with Damian as Damian was in love with Conrad, eventually I had to concede. There was no help for it;he had to go.

Here's a little excerpt from the start of the scene.

Paul was asleep when Damian entered his hospital room. He crossed quietly to the bed then stood there for a moment, studying his friend while he slept. Paul had lost so much weight he appeared practically skeletal. Yet there was such a harsh, ethereal beauty to his face it all but stole Damian’s breath. Paul’s head had been shaved at some point recently. It was covered now with a downy layer of reddish-brown fuzz. It looked fragile and much too delicate, like an overripe peach. A single vein pulsed at Paul’s temple, beating out such a rough, erratic tempo that Damian could only stare at it in fascination as fear and a desperate sort of hunger warred within him.

How little effort it would take to tear that vein open; the merest brush of one fang would do it. As it was, he half-expected to see it punch right through the thin skin all on its own. Or perhaps the bleed would be subcutaneous, and Paul’s life would rush out in an unstoppable wave, blue blood spreading like a lake beneath the pale, translucent surface.

He couldn’t bear the thought, couldn’t stand to see Paul’s lifeblood wasted like that. The end was drawing near; Damian could sense it. Paul’s body was nearly worn out. Once the blood currently flowing in his veins was gone, there’d be no more to take its place.

It was all Damian could do to keep his fangs sheathed and not drain Paul dry, take his essence inside himself and preserve what he could of it. Perhaps that’s what he’d really come here for. Perhaps it was what Paul would have wanted him to do…

But no, he’d given up his right to claim anything more of Paul the night he let him go.

“Oh, Pablito.” It seemed ironic and unfair, counter to all the laws of nature that Paul, who was still so young, should look so old—especially when Damian considered his own appearance. But what about their situation had ever been fair? When had Fate, that cruel mistress in whom Paul had always put such child-like faith, ever not mocked them? For twenty years Fate had been leading them here—to this room, this moment, this final good-bye—along a road that they themselves had paved with foolish hopes and broken dreams. 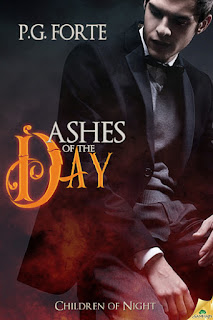 Only blood can break your heart.
Children of Night, Book 4
New Year’s Eve, 1999. The world is braced for Y2K, but that’s not the only ticking time bomb in Conrad’s life. Damian wouldn’t be the first vampire to find a way to die, but Conrad is determined he will not be one of them.
Present day. Damian struggles to trust that fate could possibly be kind enough to give him a love as perfect as Conrad’s. Conrad balances on the keen edge of his own fear that one more slip of his formidable control could drive his lover away—permanently.
Julie learns the hard way it’s not just interspecies relationships that seldom work out. Even between vampires, love is not a smooth course.

Meanwhile, intrigue and conflict within the nest continue to grow, fueled in no small part by Georgia’s slipping hold on a deadly secret. Marc works to consolidate his position as leader of the ferals—and discovers that being a walking anomaly has certain advantages. Including some that are totally unexpected.
Product Warnings
Contains more love triangles, more power struggles, more tears and teeth gnashing, and even more graphic scenes of manlove between moody, domestically inclined vampires than in previous editions. Definitely not recommended for anyone suffering from ALSSD (Auld Lang Syne Sensitivity Disorder) or with aversions to ballrooms, evening clothes, sarcasm, or close-quarter stiletto combat.

Email ThisBlogThis!Share to TwitterShare to FacebookShare to Pinterest
Labels: Ashes of the Day", Children of Night, PG Forte