How a Contest Critique Set My Story on the Right Course

Posted by: Ruth A Casie
Before I published my first book, Knight of Runes, I entered a contest not with hopes of winning, which would have been awesome, but rather for feedback. More than anything, I wanted feedback.
I did very well in the contest actually. Well, according to two of the three judges anyway. The swing in the third set of scores was, well that is a blog for another day. Suffice it to say, I placed well but didn’t win. But I did get the feedback. Awesome!
My story is a time travel. Our heroine says the right words, carries the correct talisman, and is standing in the right spot, a constellation of events that transports her back in time 400 years. I set the magic place at Stonehenge.  I know I took some ‘poetic’ license. The great stones now stand protected behind a fence. No longer can visitors walk up and around them.  One judge noted that she lived near some great stones that were older than Stonehenge and there weren’t any barriers. The stones stand proudly amidst the village of Avebury, Wiltshire County in southern England.
Avebury is impressive. While erosion and vandalism, to say nothing of religious persecution, has reduced the henge, it is breathtaking. Like other henges, construction at Avebury started with deforesting the area somewhere about 3700 B.C. Archeologists estimate the actually setting of the stones began about 3000 B.C. when the central Cove, the early part of the Sanctuary, was built. Construction moved outward and lasted for several centuries. The circle covers almost 29 acres with a circumference of almost 1 mile. Concentric circles of stones defined the borders of the circle. These circles are much larger than the more famous Stonehenge. As a matter of fact, Stonehenge would fit into the outer stone circle at Avebury around 130 times.
A large portion of village resides inside the Avebury circle.
The Cove is the area of the henge where Rebeka, my heroine, is drawn into the time portal.  Like the rest of the henge, it’s been a long held belief that the stones represent male and female characteristics. A male scientist must have done this designation as male stones are long and think while the female is short and square. The two surviving primary stones at the Cove are perfect examples.  I thought the Cove the perfect place for Rebeka’s adventure to begin.
To my surprise, my publisher repriced Knight of Runes. It’s now available for $0.99. The sequel to the story, Knight of Rapture is currently $0.99 but only until Tuesday, March 15 when it returns to $3.99.

Knight of Runes
It’s the 21st century, time travel is still an Wellsian fantasy but not for Rebeka Tyler. The renowned renaissance scholar finds herself tossed into the 17th century. While trying to find her way back she discovers the only person who knows the answer but it will cost her dearly, her heart, and if she’s lucky, her future, for she has not been tossed into the past, but returned to where she belongs.
Amazon, BN, iBook, Kobo

Knight of Rapture
The 17th century warrior knight, Lord Arik, manages his estate well and his people honorably. When his sorceress wife, Rebeka, is tricked into returning to the 21st century, he spends months trying to find the precise spell to rescue her. But he never expected he would have to fight to keep all he holds dear from being obliterated from history. Must he sacrifice his love for Rebeka in order to keep her safe and secure his family forever?  Or will the great sorceress once again stand by his side enabling them to work together to defeat their greatest enemy, Bran, the dark druid?
Amazon, BN, iBook, Kobo 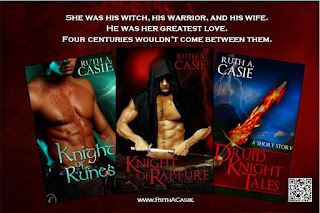