Darkwood is on sale for 99c for a few days only.

The excerpt below is from the archives because I'm deep in edits for my next book.

As I thought about the possibility of being married in just over a year, an icy wind blew over my bare toes. That was strange. We were on the south side of the island and inside the cave. This was not a place of icy winds. Not on the last day of summer anyway.
“Did you feel that?” I asked.
“Feel what?” Finn’s voice was husky as his fingers stroked the skin of my belly.
“The wind.”
“There’s no wind tonight.” As he nuzzled my neck, my eyes were drawn to the mouth of the cave.
By the light of a full moon, I saw a dark shape near the place where the waves met the sand. At first I thought it was a trick of the light. Then the dark shape began to move and change. First it appeared to be a huge butterfly, then a billowing sail, then a sinuous curl like the black smoke from a fire. Had one of Matilda’s shadows escaped? No, impossible, I’d seen her pack them away. Perhaps she’d come down here to practice, although why she’d do that I couldn’t imagine.
I wriggled out of Finn’s arms and, after pulling on my clothes, scrambled out of the cave. Half expecting to see Matilda, I glanced up and down the beach, but she was nowhere in sight. I moved closer to the water’s edge, curious to observe this strange shadowy phenomenon. It now appeared more like a lava lamp, with dark blobs expanding and contracting to their own rhythm.
“What is it?” asked Finn, who had also pulled on his clothes before coming to stand beside me. “Something your cousin made?”
“I don’t think so. It doesn’t have enough substance. It’s the sort of thing Matilda might’ve made when she was starting out, before she really knew what she was doing.” I looked up and down the beach again wondering who was playing with shadows, but we were the only ones on the small expanse of sand.
Finn slipped his hand into mine. “Is it dangerous?”
The mention of danger reminded me of Amalina’s prediction, but so far as I could tell the shadow didn’t pose a threat. It was just twisting around at the water’s edge, morphing from cloud-shape to butterfly to lava lamp, and back again. 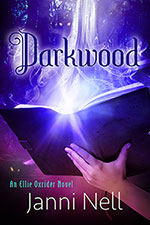 Wannabe witch, Ellie Oxrider, is having the worst week of her life.

First, her aunt has a premonition that Ellie is in danger. Okay her aunt’s predictions aren’t always accurate, but when Ellie is stalked by a faceless shadowy figure, she’s forced to take the warning seriously.

Already on her guard, she’s suspicious about the new guy in town. Saxon Darkwood claims to be an accountant, but he seems to know an awful lot about magic. Could he be the faceless stalker?

Ellie is determined to discover the truth and not even the darkest magic will stop her.


Janni is also the author of the Allegra Fairweather series of humorous paranormal mysteries.