Dead Lady Vanishing is the second book in the Bolde and Baulsey mystery series. This time Natasha (Tash) Bolde and her ghostly crime-fighting partner, Clover Baulsey, are investigating some old and very nasty ghosts, who are causing trouble at creepy Wildfinch Hall. Here’s a sneak peak:

My flashlight illuminated the name Wildfinch Hall. Really? Somebody had been reading too many Brontë novels. And we weren’t even in Yorkshire. I wondered whether Heathcliff was at home.
“Stop messing around,” yelled Clover. She was already on the other side of the gates. Unlike me, she could walk right through them. “Come on.”
“The gates are locked,” I said, directing my beam onto the padlock and chain.
“Then climb over.”
It wasn’t the first time I’d trespassed at Clover’s insistence and I guessed it wouldn’t be the last. Sticking the flashlight in my pocket, I surveyed the curls and scrolls of wrought iron, which appeared to provide plenty of hand- and footholds. It wasn’t until I grabbed hold that I realized the metal was dangerously slick with rain. I slipped and banged my knee. Sucking in a breath, I tried again, more carefully this time. As I made my way up, the gates wobbled. The wind whipped around, threatening to toss me on my ass, but I clung on. When I reached the top, I swung one leg over and then the other. For a second I balanced on top then I jumped down, landing with a crunch on the gravel driveway.
Jagged lightning split the sky. For a moment it was bright as day. A large building—we’re talking Pemberley or Downton Abbey—stood on the crest of the hill at the end of the driveway. The scream must’ve come from there.
As I started toward it, Clover called, “No, this way,” and set off across a wide lawn dotted with swaying trees.
Forgetting about the pelting rain, my wet shoes, and the chill that turned my breath misty white, I went after her, flicking on my flashlight again as I ran.
“Is the woman still screaming?” I panted.
“No.” She sounded worried.
“Maybe you’ve gone the wrong way. The scream must’ve come from the place on the hill.”
“It didn’t.” She continued to move away from the house.
“You do realize I’m soaking wet,” I grumbled. Honestly I wished I’d stayed in the cramped car. At least that had been warm and dry. But Clover wasn’t sympathetic. Probably because, no matter how hard it rained, she was bone-dry. One of the advantages of being a ghost.
I stepped in a puddle halfway up my shin and swore loudly. Mud squelched as I pulled myself free. Clover had gone on ahead. I trudged after her.
Suddenly she yelled and pointed, “Over there. Near the wood. It’s some sort of building.” She moved fast, gliding over the grass. I hurried after her.
The building had been constructed in the style of a mini Roman temple with stone walls on three sides. On the fourth side a short flight of steps led to a porch with a roof supported by columns. By the time I reached the steps, Clover was moving across the porch toward a wooden door. She could easily have passed right through it, but she suddenly stopped and took a step back. Had she met some kind of resistance? I moved closer so I could hear what she was saying.
“What the—?” She squared her shoulders. Then, raising her voice above the storm as though she was speaking to someone, she said, “Who are you? Why did you scream?”
As she listened to the answer, she tapped her foot like she did when she was pissed. “I’ll mind my own business when hell freezes over! Who the hell do you think you are anyway?”
Frustrated that I could only witness one side of their exchange, I yelled, “Clover, what’s going on?”
But all her attention was on the other ghost. She looked it over from head to toe. “You’ve been here a while, haven’t you? When did you die? Nineteenth century?...No, I won’t go away. I heard a scream. Was it you?” Her hands rested on her plump hips, feet apart, in the determined stance I knew so well. She clenched her fists and demanded, “Get out of my way.” A second later, she doubled over. Had she’d been gut-punched?
“Clover!” I rushed up the steps.
“Stay back,” she warned, but I kept going. Her assailant was a ghost. It couldn’t hurt me. Not physically anyway.
I'd almost reached her when her head snapped back. Had she been punched in the jaw? She lashed out, one-two, with her fists. Then suddenly her hands were pinned behind her and she was being pushed toward the door.
“Let her go!” I launched myself at whoever was holding her and swung a punch. I’d never fought a ghost before. I was shocked when my fist sank into something thick, viscous, and bitterly cold. I yelped as the icy sensation crept up my arms and entered my chest. It was hard to breathe. For one terrifying moment, I heard the faraway sound of a woman screaming in torment.
Clover struggled to escape whoever had pinned her arms behind her. She yelled, “You have no right to—” Her voice was abruptly cut off as though someone had her around the throat. I wanted to help, but the icy cold that had settled in my chest moved up through my neck and into my skull. I’d had brain freeze before but this was much worse. I fell to my knees, cradling my head in my hands, moaning. What was happening to me? I couldn’t think straight, could hardly move. I huddled in a pathetic mound, willing the pain to go away.
“Tash!”
Clover was in trouble…I had to help her…somehow. With a huge effort I managed to raise my head. I saw her throw a punch then suddenly she was down on her knees, her back arched, head bent way back. Her bright blue eyes locked on mine. I heard her panted breaths, saw her struggling to defeat her opponent, but she couldn’t do it alone.
“Tash! Help me!” 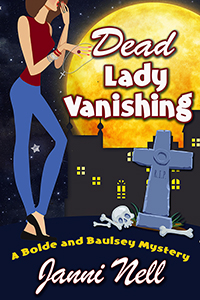 I’m Natasha Bolde and I see ghosts, well one ghost anyway: Clover Skye Baulsey, PI. In life, she was my best friend and mentor. In death, she’s been my rock, my conscience, my shelter. I’d follow her anywhere, but I really wish I hadn’t followed her to Britain’s Wildfinch Hall, because that’s where she disappeared.

The last thing she did was call for my help. Since I don’t know much about the spirit world I called Joe Nettleford, who moonlights as a ghost hunter. He’s good as what he does, but it’s kind of awkward since I refused to date him. So now I’m not sure what’s going to be more difficult: working with Joe or untangling the secrets of Wildfinch Hall and its ghosts. Still I’d better find a way to succeed at both. If I don’t, I’ll never see Clover again.