New Release with a Flying Pig on the First Date

Posted by: Jenny Schwartz
Fantastical Island released last week and is 99c for a short time (free to read in Kindle Unlimited). Below you'll find an excerpt from Naomi and Corey's first meeting - there's a bath, a slippery winged pig and a gorgeous couple just meant to be together. 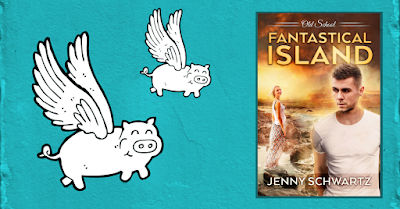 Someone is hunting the fantastical creatures of Catalina Island.

When a magical amulet gives marine biologist Naomi Twain the power to see through glamours it plunges her into a world of danger and intrigue. Fantastical creatures are everywhere, but hidden, on Catalina Island—and someone is hunting them, putting at risk a unique, magical ecosystem.

Corey Madrigal is bathing a behemi, a flying miniature pig, when Naomi crashes into his life. With a natural talent for seeing through glamours, he feels a responsibility to the creatures of his island home, creatures who were the friends of his childhood. Now, he’s a Hollywood special effects artist, and he’s going to be an amazing ally for Naomi in her quest to capture the hunters of the island’s fantastical creatures.

But the hunters have their own agenda.

And then, there's the ghost...


Intense danger, wild storms, and passionate loyalties put to the test. Fantastical Island is a stand-alone adventure in the Old School series.

Naomi gripped the corner post of the veranda. The post was too skinny to hide behind, but she tried.
Fortunately, the man had his back to her. His light gray t-shirt was dark where water had splashed him, and muscles shifted and rippled as he struggled with something in the tub. Suds slid over the rim and onto the lawn.
The “something” kicked the tin tub with a sharp, desperate scrabble, echoed by a high, thin squealing sound.
“This is your fault, Cliff.” The man had a low, calm voice. He sounded determined. “You chose to roll in that dead fish. You can’t come in the house till you’re clean.”
Another squeal answered him. The scrabbling, kicking drumbeat intensified, and the black and white behemi she’d seen circling the house scrambled out of the tub and made a dash for freedom—straight toward Naomi.
The man turned, saw her, and his eyes widened in shock. They were the crystal clear green of peridot, unique and arresting. Otherwise, he looked ordinary. His face was square with a wide nose and wide-spaced eyes. His dark brown hair was short. His mouth was firm-lipped and well-cut.
Naomi only had an instant to take it all in, before instinct had her reacting. As the behemi ran squealing toward her, its wings too wet to fly, she tackled it to the ground. The behemi smelled of rotting fish and pet shampoo, and it was slippery. She understood how the man had lost hold of it.
“I’ve got him.” He crouched beside her and his large hands grasped the behemi behind its front legs. That was probably the best, or only way, to hold the rotund, slippery beast.
Well and truly caught, the behemi ceased squealing and snuffled the man’s neck in a friendly fashion.
The man didn’t appear to notice. His frown and attention were all for Naomi.
She stood up slowly, self-consciously aware of how wet—and smelly—her sweater now was, but also trying to get a feel for the situation. The man bathing the behemi had to know it was a behemi. Glamours worked to hide fantastical creatures, but she’d never heard of a glamour that survived the truth of touching a creature. The man had to know that his miniature pig had wings.
So his question would be, had she noticed the behemi’s wings when she tackled it? Should she tell the truth or should she run? Lying wasn’t an option. She hated lies.
“There’s a bucket by the back door,” he said unexpectedly. “It has a melon rinds in it. Can you bring it here, please? I’m going to have to bribe Cliff to stay in the tub.”
Bemused, she followed his instructions.
The man had Cliff back in the tub and was scrubbing the behemi when Naomi returned with the melon rinds. “Do you mind feeding him? You don’t seem scared of pigs.”
Ah, so the stranger was going to try the old hide-in-plain-sight strategy. Nothing to see here. Just a man scrubbing a pig. She could go along with that. She fed the behemi a piece of melon rind and its snuffly crunching became a backdrop to their conversation. “I worked at a vet clinic while studying at university. I’m afraid I acted on instinct when—is it Cliff?” The stranger nodded, his hands moving briskly, cleaning the creature. “When Cliff ran toward me.”
“I’m glad you did. Cliff’s not a fan of bath-time.”
The behemi squealed.
Naomi fed him a second piece of rind.
“Although I’m curious how you came to be here?” The man paused in scrubbing the behemi to glance at her. Why was she trespassing in his backyard, he meant
“I…um.” Her thoughts scattered, stampeding in all directions as she noted the soap bubble stuck to his chin. He wasn’t much older than her; probably not yet thirty. The fact that she found him attractive—those green eyes!—made everything worse. She should have done some reconnaissance before venturing down the driveway. Even with the temptation of the behemi’s presence, at a minimum, she should have found out who lived here. “Your house is unusual. I was curious.” Both were true statements, although she’d been more curious about the behemi than the house.
He washed the behemi’s wings while she, embarrassed, looked everywhere but at him.
Sneaky! She was impressed. If she hadn’t peeped at him, he’d have used her embarrassment to wash the behemi’s impossible wings while she wasn’t looking.
Okay. Think! If he was trying to hide the behemi’s wings from her, he might believe that the behemi’s glamour had worked on her, that she thought Cliff was an ordinary pig, even if he knew better.
Which raised an interesting question. How did the man see through the behemi’s glamour? She had the amulet. Did he have one or was he a wizard?
“I’m Naomi Twain.” She fed Cliff a third piece of rind and held out her empty hand to the stranger, inviting him to introduce himself.
“Corey Madrigal.” His handclasp was firm despite being slippery with pet shampoo. The soap bubble clinging to his chin popped. “Can you keep Cliff occupied with the melon rinds?”
She grinned at the behemi’s blissful expression as it chewed the latest rind. “I don’t think that’ll be a problem.” 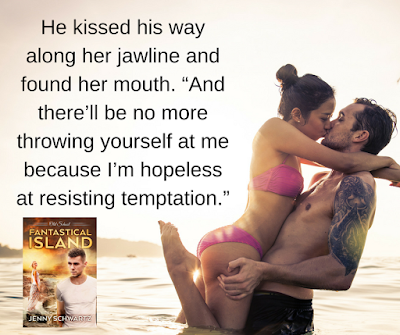