When is a Beach Not a Beach? 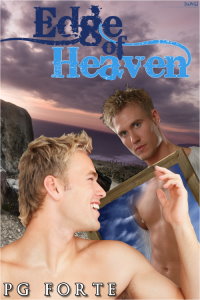 When is a beach not a beach? When it's a projection of your thoughts! Or at least that's how it works out in my M/M fantasy story, Edge of Heaven. My main characters are angels (or angels in training, if you like) stuck in Limbo, a place where what you see is what you get...and what you think about is what you see.

Edge, my viewpoint character (and perpetually bad-tempered angel trainer) has been in Limbo a long, long time--mostly due to the fact that he's really good at ignoring his own issues, but his newest assignment is bringing those issues front and center. In this scene, Edge gets to know his newest trainee a little bit better...

“Is this a bad time?” Matteo asks, showing up on my beach unannounced. He’s gazing at me a little uncertainly, and I guess he’s responding to the look of shock on my face. At least I hope I look shocked. It’d beat looking panicked, disgusted, and dismayed, which is closer to how I’m really feeling. New as he is, there’s no way he should have been able to follow me here, so hell yes, it’s a bad time!

“I see.” Matt’s brow crinkles up. He looks around curiously. “So what is this place, anyway, Hindu hell?”

“Okay, Buddhist maybe. Same basic philosophy, isn’t it? Nothing you see is real. It’s all illusion, and everything’s the same: good and bad, pleasure and pain, action and inaction, blue and green.”

A smile tugs at the corners of his mouth. “Well, yeah, you know, ’cause that’s how the world looks, right? From a distance?”

I don’t want to do it, but I can’t help laughing. “Cute, pal. But I’m pretty sure the Divine Miss M’s no Buddhist.”

Matteo grins. “My mistake, then.” He points at the log on which I’m sitting. “May I?”
I’d like to say no, but I’d have to have a reason to do that. A good reason I mean, one I’d be willing to admit to. Which I don’t. “Sure. Help yourself.”

It’s a big log, practically a whole tree. There’s plenty of room for us both. At least that’s what I tell myself. Still, it’s an effort to keep from moving away. I want to slide over to the very end to make sure he doesn’t sit right next to me. Which he does. Big surprise, huh? I don’t want to sound like a wuss or anything, but the guy’s clearly got no sense of personal boundaries. He’s sitting so close to me our shoulders are practically touching. I can feel the heat rising from his skin. It’s sensuous, tempting. I have to fight the urge to lean into it.

“So seriously, what is this place?” he asks, surveying the scenery.

I’m kind of wondering about that myself. I mean, I know what I see when I look around me, but I also know it’s a reflection of my own thoughts. None of it is actually real. Does Matteo see what I see? Or is he seeing something else? “What does it look like to you?”

He glances around again. “Somewhere along the West Coast would be my guess. Northern California, Pacific Northwest, something like that.”

“Yeah, that’s how it looks to me too.” I stare out at the ocean. Sunlight dances on the waves. A couple of gulls fly by. Who’s to say what’s real, anyhow? “This is the beach I used to go to as a kid.”

I point at the rocky shore. “There are tide pools between those rocks. Man, I used to love messing around down there. And over that way”—I turn and point over his shoulder to that place where the beach ends in a fall of boulders and water laps at the base of the cliff—“is the entrance to a cave. It’s hard to find. You can only reach it at low tide. Sometimes not even then.”

“It seems like all of the best things in life are like that, aren’t they?” His voice is low, suggestive. I feel it in the pit of my stomach.

“Hard to get.” He’s staring right at me. Our faces are just inches apart. I can see the gold flecks in his dark eyes and the fine gold stubble that lines his jaw. My fingers are tingling. It’s like I can already feel the sandpapery texture of his cheek sliding against my open palm. His lips are full, slightly parted. They look soft. They look inviting.

I put my hand in the center of his chest and push. “Tell me more about yourself.”

“What do you want to know?” he asks, lips twitching into a tiny smile. “I swear I’m clean. No drugs, no diseases. Or does that even matter here?”

I shake my head. “It’s none of my concern. And it’s also not what I’m talking about.” My hand is still pressed against his heart. He seems not to mind. I do, but I just can’t seem to move it away. “Tell me how you died.”

And there goes his smile, disappearing in a red-hot instant. He straightens—away from me, away from my hand—and looks out at the water once more. “It was so stupid, you know? So totally senseless.”

Oh crap. There’s an unmistakable tinge of anger in his voice. Eerily familiar, it puts all my nerves on alert. My heart starts pounding. My jaw gets tight. I don’t want to ask it, but it’s my job. I have to know. “What did you do?”

“Me? Nothing. It was an accident.”

“Damn car came out of nowhere.”

I blink in surprise. “Car?” Okay, not what I was thinking, then.

Matteo nods. “I was out for my morning run along the beach in Santa Monica. Only it was Saturday and I’d slept in, so it was later in the day than I generally go. On my way back, I noticed the stores along the Promenade were open—which they usually aren’t when I pass them. There was this kiosk with the cutest baby mobile hanging up in it. My best friend and her partner are trying for a baby. It’s been a couple of months, and it hasn’t happened yet. It will, though, you know? I mean, they’ve done all the tests, and there’s no reason it shouldn’t. I wanted to give them something to help keep their spirits up, and this mobile was so perfect I couldn’t resist. I just had to have it. So I crossed the street, and…I was waiting while the sales clerk wrapped it, when it happened.”

“When what happened? I thought you were killed by a car?”

“I was. Driver must have had a heart attack or something. Car jumped the curb and plowed right into us. It was my bad luck that I had my back to it at the time. If I’d had a little more warning, I might have had a chance to get out of the way.”

“You were hit by a car while you were shopping.” It’s not really a question—I’m just trying to wrap my mind around the absurdity of the idea. “While you were buying a gift for your friend’s baby.”

“Yeah. Can you believe it? And now…I’m never even going to see the kid, never know if it’s a boy or a girl or what they name it, who it looks like…”

I nod, but I’m not really listening. To be honest, I’m feeling a little bit jealous. My death was stupid and senseless and largely accidental too. I left stuff unfinished. I left people behind. But there’s one big difference. My death was my own damn fault.

Welcome to the afterlife, where men are men and the angels are fallen.

It was a reckless act of passion that ended Edge’s life and left him in Limbo—literally. Now, he’s stuck here. While most of the other angels-in-training move quickly up the celestial ladder, Edge knows it can never be that simple for him. He’s dealing with issues that are a lot more complicated than a simple lack of closure.

While Edge doesn’t know for sure what it will take to get him into Heaven, there is one thing he’s certain won’t help – his latest assignment guiding angel-baby Matteo Matinucci while the newbie find his wings.

But twenty-something Mattie—sexy, beautiful, recently departed, and openly gay—could turn out to be the answer to all of Edge’s prayers, as well as the fulfillment of all his fantasies, even the hot, sweaty, secret ones he’s never confided to anyone. And by helping to send Mattie to Heaven, Edge just might end up saving both their souls.