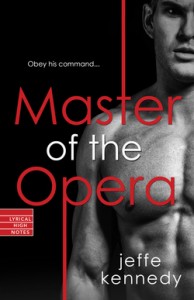 Once upon a time, I wrote a serial novel. It came out in six episodes from January to March, 2014, and was available in digital only and only in pieces.

Those of you who've waited (nearly forever!) for a consolidated version, it starts shipping from Books a Million today. It's in paper only and only from them for the next two months, in an exclusive deal. If you want to read it digitally, you still have to by each of the six episodes separately. Good news is that the first episode is FREE. So you can try it out and see if you like the story - then go for digital or paper, as you please.

An aria for lost souls
Fresh out of college, Christine Davis is thrilled to begin a summer internship at the prestigious Santa Fe Opera House. But on her first day, she discovers that her dream job has a dark side. Beneath the theater, ghostly music echoes through a sprawling maze of passageways. At first, Christy thinks she’s hearing things. But when a tall masked man steps out of the shadows—and into her arms—she knows he’s not a phantom of her imagination. What she can’t deny is that he is the master of her desire. But when her predecessor—a missing intern—is found dead, Christy wonders if she’s playing with fire…