Posted by: Evey Brett
Since I have a Gothic e-book out on Sunday, it seemed appropriate to point out that Paranormal Romance has Gothic roots. There's a nifty infographic here about the history of Paranormal Romance and how it started way back in the 1700's with Horace Walpole. Gothic novels usually combined elements of horror (such as a monster or a family curse) and romance (cue moody, secretive hero and vulnerable heroine.) Dracula is probably the most well-known, though of course there is Frankenstein, Phantom of the Opera and others.

And then women started taking over the genre, and we had books like Wuthering Heights, Jane Eyre and Rebecca, with the interesting turn that all three explore how women are trapped in the home and subjected to male patriarchy, themes that are popular today with all the kick-ass, take-no-prisoners female heroes

Though lately, paranormal romance has lost much of the horror element--i.e., vampires aren't scary any more--and taken on fantasy creatures like elves and fairies and those with supernatural powers from magical to psychic abilities. Monsters aren't the enemy, they're the love interest and/or the protagonist.

As for me, I rather like the darker elements. I don't have a monster in my book--it leans more toward the occult, but it does have the requisite moody lord, an innocent heroine (well, hero in my case) and a mysterious servant who is more than he seems. It's set in 1780's Whitby, England, home of the famous Whitby Abbey and St. Mary's church, which features prominently in Dracula.

So, hooray for Gothic Roots! And now I'm going to go home and watch this boxed set of 100 classic horror movies, which includes a number of Gothic tales. It's research, you know. Even Attack of the Giant Gila Monster. Though, really, I just had to watch that one since we found one at work the other night. Normal, not giant. :>) 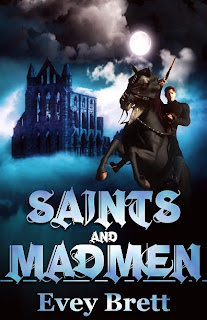 When tragedy leaves his family nears destitution, farm boy Cadmon—named after the famed saint and poet—has no choice but to accept a position with Lord Vance, the so-called Mad Lord of Whitby, posing for paintings…nude.