Knight of Darkness (and a New Audio Book!) 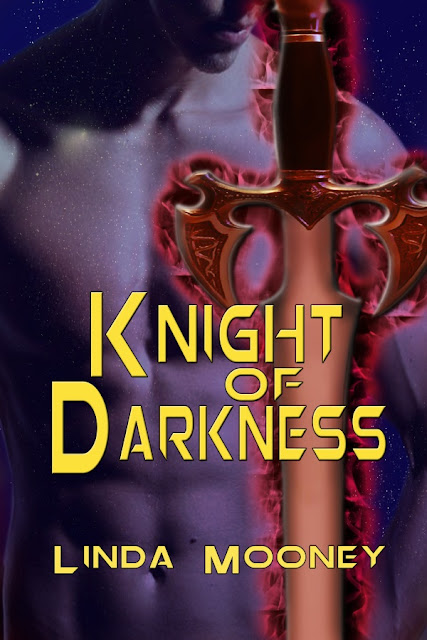 
Sorrow Knight knew that at any time the U'Nar would attack Earth, but he needed a few more days to come out of chrystasis before he could fight the deadly enemy. With his soul sword, Rall, he and the handful of other Surge Knights would gather wherever the enemy landed, and drive them off this world. A world with so many wonderful sights and surprises. A world that contained a woman named Rachel, who had captured his heart and his imagination, but who was forbidden to him by his laws.

Rachel Grohl often wondered about the skinny, dishwater-blond young man living in the apartment across the breezeway from her. His shyness, as well as his clean but well-worn clothes, tugged at her heart. They'd barely spoken a dozen words to each other since he moved in a few weeks ago, but she had to thank him for helping her the other day. Maybe asking him over to dinner would work.

They shared one dinner, one touch, and one kiss that would lead to one night of love. A love which could ultimately avert the total eradication of the human race.

************** I N   A D D I T I O N  **************************
The Battle Lord’s Lady, Book 1 of the Battle Lord Saga, is Now Available as an Audio Book!
Listen to the incomparable Kate Udall as she reads and narrates!
http://lindamooney.com/audiobooks.htm
Three hundred years in the future, mankind still is trying to survive the Great Collision that changed the earth forever. People live in pockets of civilization called compounds, battling the elements and the mutations which have developed over the centuries, trying to live and survive day by day.

Yulen D'Jacques is the Battle Lord of Alta Novis. His duty is to keep his compound and his people safe, which means yearly sweeps of the area to remove any mutated men and animals from encroaching.
Atrilan Ferran is Mutah, a mutant warrior and huntress trained to protect and defend her home from Cleaners, the “normals” who invade the forests to slaughter everything and everyone who gets in their way.

They never anticipated the day when their hearts would collide, challenging and changing everything they thought was the truth. Leading them to the day they would have to prove their love for each other to man and mutant alike.