Posted by: Susan Edwards
As a writer, I’m often asked where I get my ideas.  When I wrote my White series, the characters themselves decided the plots and their own story lines as the continuing theme centered on family.  This is one wonderful aspect of writing a series, as the series often determines where you go next.

Ideas come from anywhere and everywhere.  I collect images that move me.  For a new, contemporary series I’m eager to start, I’ve collected several storm images that I’m very excited to put into words (and hopefully terrify my readers, or at least the villains).
Other writers are spurred by conversations, stories in newspapers, online, news.  Or maybe settings they’ve visited, or photos of homes, plantations, etc.  The world is filled with inspiration and ideas for the creative mind to latch onto.

By time I wrote book eleven I  was looking to start a new series and didn’t have any idea what, who, where, etc.  I knew it had to remain historical and Native American.  I also wanted to do more paranormal. The White books had a lot of mythology, and mystic-type elements and gifts and I was edging very close to actual paranormal.

I wanted that freedom to create my own world within the familiar world my readers came to expect.  Then one day, I was looking at photos online and I came across this picture of an eye unlike any I’d seen before.  The eye was blue, with a yellow webbing over it.  The eye condition is called Heterochromia.  My writer’s mind immediately saw the possibilities.

From this photo, I created a race of humans with eyes called SpiritWalkers whose eyes are a mixture of all colors of the earth—mixed shades with this webbing. The first SpiritWalker book, Summer of the Eagle, my heroine has blue eyes, blazing shades of blue with yellow webbing.  In Autumn Dreams, the heroine’s eyes are a mixture of “mother earth”: blue, green,  brown and yellow.  My race of humans are children of the gods and are one with the earth and world in which they live.  It’s fitting that their eyes reflect who and what they are. 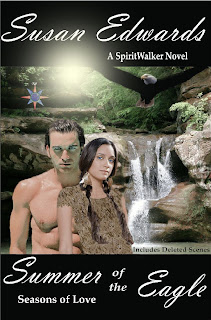 Summer of the Eagle originally came out in 2007.  Recently, I got the rights to this book back and decided to release it in digital format.  I also decided to pick up where I left off and continue this series.   Autumn Dreams, book two, will be released in digital, or ebook format in Nov 2013.  Both books are part of the Seasons of Love mini-series.

The SpiritWalker world has grown and will expanded into a contemporary paranormal series that is actually four different worlds (5 including historicals) , yet they are one world.  This aspect comes directly from the Native American beginnings of four gods yet they are as one.  I can’t wait to introduce my readers to this world.

It just amazes me that all this began with one image that inspired a new character, that demanded her own series that then became the  inspiration of an entire world that (breathe) will give birth to not just one new series but at least five!  Five series that include historicals and contemporaries.  Five worlds that are really just one, and that one world came from a picture of one beautiful eye.

How’s that for ideas circling around.  Is this inspiration or creative genius?  I believe that creative people somehow tap into the ordinary and we "see" or "feel" more than non-creative types.  We see not just what is there but what could be there or should be there.

So how about you?  If you are a writer, where do you get your ideas?  What inspires you when the idea factory has closed for the day?

If you are not a writer, tell me what inspires you and why?  What do you do with ideas that float around in your mind.

Click to read the Prologue and Chapter One
To celebrate the re-release of Summer of the Eagle, I am doing three things the rest of this month and part of August.  (Contest info is being updated this weekend and Monday on my website)
1              I am giving away a free screen saver of my book covers to everyone who signs up for my private mailing list.  If you are on my mailing list, send an email to susan@susanedwards.com to be entered.
2              This is also my contest on my website:  sign up  and your name goes into a drawing with an additional prize of a homemade wolf print book cover.  Check it out (should be up by Monday at the latest.
3              Also, leave a comment and I will draw one name for a free copy of Summer of the Eagle here.  If there are more than 10, I will draw two names.

Susan Edwards
Susan is the published author of 12 Native American/Western historical romance books. She has eleven in her White Series and one in her new SpiritWalker series. November of 2011, the first 4 books in her White series be re-released in E-Format by Carina Press. Books 5-8 are due out Feb 20 2012. Susan loves nature, in particular birds like hawks, owls and eagles. She also loves wolves and big cats and is herself owned by no fewer than 5 housecats and two Chiweenie rescue pups. Her cats have trained her well! Two of them are over the 23 lb mark and are just huge cats, not just fat. Now that her children have left the nest, her animals have become her kids. Susan and her husband enjoy riding their ATV, hiking, bicycle riding, gardening and other outdoor activities when time allows.