The Allure of Bromance


I remember my first time. I was probably no more than ten years old, reading Little Men (a book I found vastly superior to Little Women, by the way) by Louisa May Alcott when I stumbled upon the characters of Nat and Dan.

Nat was a musician, tender-hearted and loyal to a fault. His friend Dan was the strong, silent, bad boy type, fearless and tough, good at pretty much everything--but with a soft spot for babies and a way with animals. He was the kind of guy who wouldn’t think twice about putting his safety at risk to save someone else. The kind of guy who’d sacrifice everything he held dear for his friend’s sake.

Back then, the word bromance hadn’t even been coined, but whatever the two of them had, I fell in love with it on the spot.

That kind of not-necessarily-sexual, but unquestionably devoted male/male bonding has been on my mind a lot this week, between having just seen the new Star Trek movie (yes, twice, what can I say? I’m a sucker for this kind of stuff) and today’s release of Ashes of the Day. Because, at its heart the whole Children of Night series is one long complicated bromance.

My editor used to ask me who each new book in this series was about (in terms of romantic couples, that is).  She’s stopped doing that. I think she's gotten used to my sheepish looks and mumbled responses, “Um…well…you know…it’s kinda...well, it's sorta about Conrad and Damian. Again.”

Honestly, I don’t think she minds all that much. Because the truth is, even when one or the other of them is involved with someone else (something I've been told not to do) their connection, their bond with one another is what holds the family together. It’s also what drives the entire series.

To celebrate this release I’m having a giveaway. Cookies might seem a little bit strange for a book about vampires, but if you read the book, I promise you'll see how completely apropos they really are! 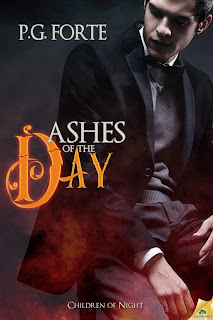 Ashes of the Day
Children of Night, Book 4

Only blood can break your heart.

New Year’s Eve, 1999. The world is braced for Y2K, but that’s not the only ticking time bomb in Conrad’s life. Damian wouldn’t be the first vampire to find a way to die, but Conrad is determined he will not be one of them.

Present day. Damian struggles to trust that fate could possibly be kind enough to give him a love as perfect as Conrad’s. Conrad balances on the keen edge of his own fear that one more slip of his formidable control could drive his lover away—permanently.

Julie learns the hard way it’s not just interspecies relationships that seldom work out. Even between vampires, love is not a smooth course.

Meanwhile, intrigue and conflict within the nest continue to grow, fueled in no small part by Georgia’s slipping hold on a deadly secret. Marc works to consolidate his position as leader of the ferals—and discovers that being a walking anomaly has certain advantages. Including some that are totally unexpected.