.When a wayward spell unites a modern-day witch and a cursed medieval blacksmith, their passionate attraction thrusts the pair directly into the path of the ancient, evil Fae.
,
Kidnapped on his wedding day in the twelfth century and forced into a thousand years of servitude by a heartless Fae princess, rugged blacksmith Aidan dreams of nothing but revenge on his captor. Then the spell of a beautiful witch brings him into the modern world, and a passionate desire awakens within. But to build a future, he must first confront his past…
.
Modern witch and magic-shop owner Brooke doesn’t think her life is missing anything, until a wayward enchantment lands a brooding medieval blacksmith in her spell room—and in her arms. But even after their passion proves to be truly magical, Aidan’s first commitment is to vengeance. Now Brooke must team up with friends and ancient warriors alike—and push her own powers to their limits—to save her love from the clutches of the wrathful Fae.
.


Storm Bound is Book Two of the Grim Series
Note: Every book in this series is designed to stand alone.It's fun to read them in order, but you won't get lost if you don't!

Available in Kindle ebook, paperback and audiobook on AMAZON 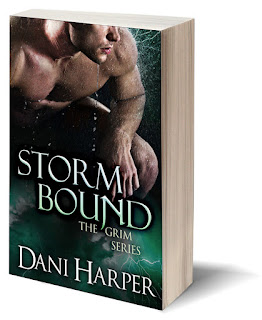 Celynnen wanted what she wanted. And what the princess wanted from him was everything, both body and soul. Most of all, she wanted him as a willing partner in her bed. The Fae had often been known to seek out human lovers as diversions, but Aidan ap Llanfor had been determined to die before complying with his captor’s wishes in any way.

But it hadn’t been that easy.

He was still chained in the courtyard when she came to him one night, dressed in little more than moonlight. Her hair cascaded wildly down her smooth backside like a waterfall of silver, her shapely arms open to reveal her flawless breasts caressed by a transparent fabric that seemed to have tiny stars woven into it. Her long legs were naked, her delicate feet bare except for an exquisite silver bracelet around one perfectly-turned ankle. Tall and lithe, bold in her nakedness, she was a goddess: Diana the Huntress stalking the earth with the moon as her consort.

Aidan’s chains fell away as she lightly grasped one of his hands. “Come with me.” Her voice was a soft sultry whisper. “Let me show you the pleasures of my bed, dearest Aidan. Do mortals not sing songs of the skills of faery lovers?”

Such unearthly beauty coupled with such an alluring offer would have brought a lesser man to his knees. But while Aidan’s memories might be slowly fading under the influence of the faery realm’s magic, he refused to forget that this inhuman creature was his captor, the despoiler of his life, the one who had plundered whatever dreams he might have had. He was less than a slave to her; he was a temporary plaything, a toy, and he knew it.

He spat at her, marring the nearly invisible fabric right over the spot where her icy heart likely lay. “I’ll not be your pet,” he declared, fully aware of his danger. Although Celynnen appeared to have no weapon, she was more than capable of killing him with a single word. Aidan stood straight, calmly waiting for the death blow to fall, his only regret that he was unable to fulfill his vow to bring about her demise as well.

The blow didn’t come. He could see the fury in her iridescent eyes, the sharp relief of her features as an unholy anger lit them from within. “You are gravely mistaken, mortal,” she said, and her voice was deep with rage. “You will be my pet for as long as I will it.”

A shard of green lightning suddenly snaked down from a cloudless night sky and wrapped itself around him.

“You will learn to do much more than merely obey me,” she declared, as a violent seizure threw him to the ground. Every muscle and tendon, each bone and sinew, suddenly seemed to tear apart from each other and reshape themselves. Convulsing uncontrollably, he would have screamed from the pain had he been able to draw enough breath.

“You will learn to devote yourself to me until you crave my every wish,” she intoned.

The bones in his face felt as if they’d exploded, reforming into something alien. His spine stretched torturously until his tailbone uncurled and grew, adding fresh agony to his suffering. Skin split and reknit, fingers shortened, toes lengthened. He was able to draw in a great sucking gasp of air just as the torment reached a crescendo – and his scream came out as a long, hideous howl. The sound rose into the night sky like a live thing, as if to plead with the stars themselves for an end to the unbearable. Perhaps they heard him. His body was still ablaze with pain, but compared to what he’d just been through, he could shoulder it. Panting heavily for breath, he lay on his side with his eyes closed.

“You will learn to adore me with every breath you take,” she said finally, emphasizing each word. “Until every thought you have is of your undying love for me.”

Damn that to hell. Aidan fought to get up then, his eyes opening to a new nightmare. His strong hands and powerful arms, the instruments of his craft, were gone. Instead, long legs stretched out before him, ending in enormous paws. The blackest of fur shrouded his skin, and a long dark muzzle intruded on his field of sight. He glanced about, taking in the thickly muscled torso and haunches, and the strange new appendage of a tail, and as he struggled unsteadily to his feet, Celynnen laughed.

“Did I not say you would be my pet?” She stood boldly in the bright moonlight, her all but naked body silvered by it. There was something silver in her hands too, a great wide band crafted of intricate links.

What she held was a collar, as if he was truly and completely a dog. With a lion-like roar, he leapt at her with bared fangs, bent on tearing out her marble-white throat. His fearsome teeth never connected however. She backhanded him with such power that he struck the stone wall he’d been chained to and slid to the ground in a dazed heap.

He tried to rally himself for another lunge, but at a word from Celynnen he was tied with invisible bonds as securely as if he’d been bound with iron chains from his own forge. Even his muzzle was spelled shut, so that all he could do was curl his lip and snarl at her.

Her perfect face was smug with satisfaction as she knelt beside him and placed the heavy collar around his thick neck. There was no clasp. Instead she ran a finger over the links and recited some sort of spell in a language Aidan had never heard. The collar knit itself together as if it was a live thing, and he winced inwardly as he heard the final snick of the last link.

Still kneeling, she smiled radiantly at him and suddenly it seemed as if her beauty intensified somehow. “I think I like you much better like this,” she said, and every word was an unwanted caress. … In the same moment that she vanished, he was freed from whatever magic had held him helpless, and he rose slowly to his feet.

He was no dog.

Massive and powerful, Aidan ap Llanfor was as far from a pet as a dragon was from a housecat. Celynnen had made him one of the most feared creatures in Welsh legend. He was a grim, the gwyllgi of stories told ’round the fire, the barghest of lore: a monstrous black hound charged with one errand only – to be an omen of death to those unlucky enough to see him.

Within moments he felt the tug and pull of some invisible force. He could sense impending death on the human plane, and it drew him upwards, impelling him to begin his woeful task.

THE GRIM SERIES by Dani Harper
STORM WARRIOR, STORM BOUND, STORM WARNED, STORM CROSSED
Note: Every book in this series is designed to stand alone. It's fun to read them in order, but you won't get lost if you don't!

See ALL Dani's novels on her Amazon Author Page