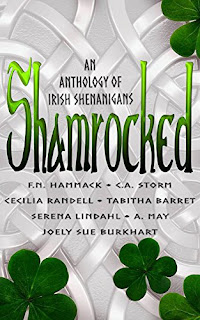 It's time to drag out your green clothes, leprechaun hat, and Guinness (okay, it's always time for Guinness but now you have an excuse)! St. Patrick's Day is just around the corner, and with it, the release of Shamrocked: An Anthology of Irish Shenanigans.

Join authors Cecilia Randell, Joely Sue Burkhart, Tabitha Barret, Serena Lindahl and C.A. Storm as they take you through tales of Irish love and folklore for St. Patrick’s day. There will be gods, immortals, gargoyles, creepy castles, ancient legends and, of course, a leprechaun or two.

My contribution is The Treasurekeeper. I've included a teaser below and I'm also running a giveaway on my Facebook page. Prizes include a Celtic-themed set of nail art from Color Street and three signed copies from Their Vampire Queen series.

The Treasurekeeper
Her Irish Treasures
Chapter One