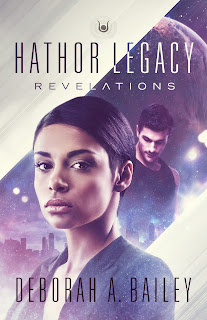 I've always liked the idea of couples being meant for each other. Bound together by fate, they're inevitably drawn together.  So, when I started working on my Hathor Legacy series, it was important to create a hero and heroine who would fit that mold.

Though when I first got the idea, Jonathan was a shady nightclub owner with a criminal past. He and Nadira weren't fated, but were thrown together while she was investigating a crime.

But in the process of developing the first book, the characters changed along with my original vision for the series.
In the completed version of, Hathor Legacy: Outcast, Jonathan comes to Hathor in search of his missing father. Nadira uses her PSI abilities as a member of the elite security force, the Guardians. Though she's responsible for investigating his father’s disappearance, she dislikes Jon at first. But, of course she’s attracted in spite of herself.

Though Jonathan could be arrogant and overly confident, his impulsive behavior helped move the story along. Inspite of his initial behavior, it was important to make Jon the type of person Nadira would grow to care about.

She creates a psychic connection with him so that she can protect him. Even though they're still at odds halfway through the book, their connection helps them to work together. And, ultimately it magnifies their physical attraction and leads to their love scene.

In book two, Hathor Legacy: Burn, their relationship has grown stronger, but it's not without pitfalls. Nadira, used to being independent and protective, ends up doing things without Jon's knowledge. He feels betrayed because she still maintains a separation between them. Yes, they're joined, but that doesn't mean they're completely open to each other.
Jonathan is an alpha male who has to manage an emotional connection where he can't hide too much from his partner. He wants to be the protector, but she's actually physically stronger due to her abilities. She has to learn to trust, and sometimes to yield. Their relationship is a bond of love, by this point in the series, but also one that is never entirely without tension.

By book three, Hathor Legacy: Revelations, they've moved through a lot of the relationship growing pains. Others around them have acknowledged that they have a real bond, even though no one really knows that Jon's secret past has a lot to do with the psychic connection. (In the interests of not revealing any spoilers, I won't say more about that!)

In fact, one of the characters says that perhaps Nadira and Jon were fated to meet and form a connection. Which, based on the events in book three, makes perfect sense.

They've grown and learned to trust each other completely. And by that point in the series, they've influenced each other enough to take on each other's traits. Instead of being impulsive, Jonathan learns to think before he acts. While Nadira, always the more conservative of the two, becomes the one most likely to rush in and confront danger.

Fated couples are drawn together by forces beyond their control, and that's when the real fun begins. They must learn to love and to trust, as they grow as individuals and as a unit.

Tension – sexual and otherwise - is always present as two strong-willed people find their footing. But, that's why their stories are so much fun to write (and to read).

***
Hathor Legacy: Revelations (blurb) -
An enemy returns to spark new tensions between the psychic Guardians and Novacorp. In the midst of the crisis, Nadira is given information about her parents that threatens to destroy her relationship to the Guardians and to Jonathan.While Nadira searches for answers, Jonathan is enticed into the hedonistic world of the Novacorp executive class. His entertainment club attracts the elite of Hathor, but his notoriety comes with a price.The worlds of the Guardians and Novacorp are put on a collision course where only one side may come out on top. Nadira is called on to make the ultimate sacrifice to save the legacy of the First Families, the original settlers of Hathor, while Guardians, Kasema and Deshtu psychic groups are faced with the choice to unite or be brought completely under Novacorp control.Old scores are settled and long-hidden truths are revealed, and at the end Nadira and Jonathan's relationship and their world will never be the same.

|Amazon| |Barnes&Noble|
***
Deborah A Bailey’s Science Fiction & Paranormal Romance stories include suspense, a bit of mystery and a lot of romantic heat. She’s the author of the “Hathor Legacy” Science Fiction Romance series and several shapeshifter Paranormal Romance novels.  Her short stories have won awards from the Philadelphia Writers’ Conference and have been published in US1 Magazine and the Sun. They’re included in her short story collection, “Electric Dreams: Seven Futuristic Tales.”