Shattered Earth (Shamans and Shifters Book 3) from Jenny Schwartz.
The scum of the galaxy are using Earth as a nuclear winter death camp. It outrages pirate captain Kohia Jekyll’s sense of justice. No one deserves to die agonizingly of radiation poisoning, especially not on the planet humanity had to evacuate seven generations ago. So Kohia intends to close the prison camp down.She didn’t count on an infuriating shaman healer hitching a ride aboard her starship.Nairo Bloodstone isn’t going to Earth to be a hero. He learned the hard way that when you’re a healer, doing your best for people is never enough. One miracle leads them to demand another and another. Heroes die exhausted and alone, and the galaxy continues with billions of people still clamoring for a miracle-worker to save them. No, Nairo isn't going to Earth to be a hero. He intends to change what it means to be human. 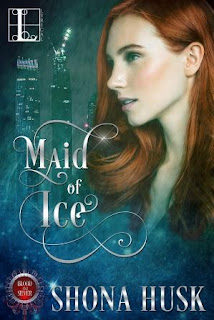 Maid of Ice by Shona Husk

Stalkers and death threats . . .
For Finlay Ryder, danger means playing a racecar driver on a daytime soap. That is, until he’s forced to reckon with his true identity as an Albah, a magical ancient race, by one of his own kind. Someone wants him dead. And worse, an ancient vampire is on the prowl, drawing blood left and right. Now, Finlay has no choice but to hunt enemies with unspeakable powers—or risk being hunted himself . . .

. . . and that’s just the first date
Ice skater Alina Nyx is using her broken wrist as an excuse for a career change. And when she falls for handsome Finlay, Albah drama feels like her new full-time job. Learning about magic and vampires is exciting, until her life is threatened. Now, as she begins to uncover her own mysterious powers, she must combine forces with Finlay to eradicate their foes for good, or all Albah will suffer . . .
buy now

Other News:
The new Book+Main Bites site for romance readers went live last week. The idea is for readers to sample 'bites' or snippets from authors and decide whether to buy the books. There were a few hiccups on the authors' side during rollout (and some NSFW photos from a few authors O_o) but revisions are underway and the site is very browsable. If you decide to try it out - it's FREE for readers - several HBM authors are there, so look for us to Follow: Ruth A. Casie, PG Forte, Linda Mooney and Veronica Scott.