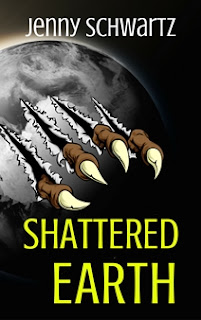 Woohoo! I love releasing a new story, even if it's nerve-racking. Will people like it? Has Amazon published the right file? *chews nails*

Shattered Earth released on Monday. If there were going to be hiccups, they should have happened by now, so I'm tentatively relaxing (euphemism for limp noodle, puddle of relief).

This is the third book in my Shamans and Shifters Space Opera series. It's a novella because it focuses on the adventure and romance of two much-loved side characters, and I couldn't risk being distracted too long from the third full-length book in the series. Everyone wants to know what will happen regarding the alien Ceph! It can be read as a stand-alone adventure, complete in itself.


The scum of the galaxy are using Earth as a nuclear winter death camp. It outrages pirate captain Kohia Jekyll’s sense of justice. No one deserves to die agonizingly of radiation poisoning, especially not on the planet humanity had to evacuate seven generations ago. So Kohia intends to close the prison camp down.

She didn’t count on an infuriating shaman healer hitching a ride aboard her starship.

Nairo Bloodstone isn’t going to Earth to be a hero. He learned the hard way that when you’re a healer, doing your best for people is never enough. One miracle leads them to demand another and another. Heroes die exhausted and alone, and the galaxy continues with billions of people still clamoring for a miracle-worker to save them.

No, Nairo isn't going to Earth to be a hero. He intends to change what it means to be human.

Just her name, said in Nairo Bloodstone’s smooth voice, and the low simmer of arousal in Kohia heated to real wanting. Damn him.

Nairo was the second man forced on the Stealth, and the one she’d known she’d have no chance of refusing. He’d invited himself aboard when he’d heard of her mission. “The chance for me to study Earth’s sha energy flows will be invaluable to my research, especially with shifters present.”

The Conclave had immediately agreed to his request. Hell, they’d have agreed if he’d asked for a harem of hundreds and all the gold on Corsairs. And with Corsairs main industry being piracy, that was a lot of gold.

“Is that all your luggage?” Kohia looked at the duffel bag Nairo carried, then frowned at his nod. The duffel bag was no larger than Aaron’s crew satchel. Kohia wasn’t used to civilians being so restrained. Then again, Nairo was the definition of control—which strummed all of Kohia’s instincts in the naughtiest of ways. Down, girl.

She hadn’t realized that she’d moved to block his access to the Stealth until he halted in front of her. She was tall. He was taller. Nairo matched Aaron for height, although he lacked the Freel’s heavily muscled build. Instead, Nairo had a lean, athletic body that suggested speed and endurance.

He waited. Without a word, simply by being there, he challenged her authority. Or perhaps it was more personal. He unsettled her. 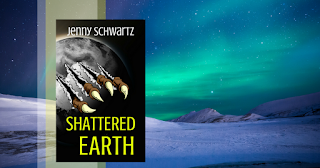