Bring It Back(List) with Ruth A. Casie

Knight of Runes was published in 2011. I didn't plan to write. I always had stories in my head, but I never thought to write them down. A friend of mine mentioned she was writing a romance story. I offered to help, brainstorm or beta read, whatever she needed. We brainstormed and I kept coming up with ideas for a historical time travel. She was writing an erotic fantasy. While the stories didn't quite work together the brainstorming and writing got me started. While she went off visiting colleges with her daughter and training for the New York marathon, I wrote my story. A year later I sold it to Carina Press. Arik and Rebeka are the hero and heroine of my heart. 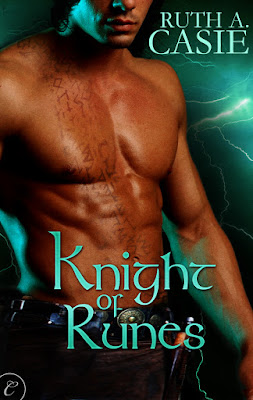 When Lord Arik, a druid knight, finds Rebeka Tyler wandering his lands without protection, he swears to keep her safe. But Rebeka can take care of herself. When Arik sees her clash with a group of attackers using a strange fighting style, he's intrigued.

Rebeka is no ordinary seventeenth-century woman—she's travelled back from the year 2011, and she desperately wants to return to her own time. She poses as a scholar sent by the king to find out what's killing Arik's land. But as she works to decode the ancient runes that are the key to solving this mystery and sending her home, she finds herself drawn to the charismatic and powerful Arik.

As Arik and Rebeka fall in love, someone in Arik's household schemes to keep them apart, and a dark druid with a grudge prepares his revenge. Soon Rebeka will have to decide whether to return to the future or trust Arik with the secret of her time travel and her heart.

England ~ May, 1605
I should not have stayed away from the Manor so long. Something stirs. Lord Arik’s eyes swept the surrounding area as he and his three riders escorted the wagon with the old tinker and the woman. They sped through the forest as fast as the rain-slicked trail would allow. Unable to shake the ominous feeling of being watched, Arik remained alert. At length, the horses winded, he slowed the pace as they neared the Stone River.
“The forest is flooded. I suspect the Stone will be as well. Willem, ride on ahead and let me know what we face at the crossing.”
Willem did his lord’s bidding and quickly returned with his report. “The river ahead runs fast, m’lord. The bridge is in disrepair and cannot be crossed.”
Arik raised his hand and brought the group to a halt. “Doward,” he said to the old tinker. “We must make repairs. There’s no room for the wagon at the river’s edge. You and the woman stay here and set up camp. Be ready to join us at the bridge when I send word.”
Logan, Arik’s brother, spoke up. “I’ll keep watch here and help Doward and Rebeka.”
Arik nodded and, with the others, continued the half mile to the bridge.
“I am not pleased with this new delay.”
“It can’t be helped, m’lord. We would make better time without the wagon,” said Simon.
“I’ll not leave Doward and the woman unescorted through the forest, not with what we’ve heard lately. We’ll have to drive hard to make up the lost time.”
The frame of the bridge stood solid, the planks scattered everywhere, clogging the banks and shallows. Arik leaped from his horse onto the frame to begin the repairs.
“Hand me that planking.” Arik pointed to the nearest board.
Simon grabbed the plank and examined it. “Sir, these boards have been deliberately removed.”
Arik took the board and lifted it before him. An arrow whooshed out of the trees, and slammed into the plank’s edge. Willem pulled his axe from his belt as Arik and Simon drew their swords. In a fluid, practiced movement, Willem spun and found his mark. He sent his axe flying. The archer fell into the river and was swept downstream, Willem’s axe still lodged in his forehead. A dozen or more attackers broke through the stand of trees.
Arik tossed the board into the river and readied his sword. The enemy was poorly dressed carrying clubs and knives. There was only one sword among them. The leader. Arik’s target.
“They plan to pin us here at the river’s edge. Come, we’ll take the offensive before they form up.” They moved forward, driving a wedge through the enemy’s ragged line, forcing what little formation they had to scatter and fight, each man for himself.
A man, club in hand, rushed at Arik. Before the attacker could bring his weapon into play, Arik pivoted around him. He raised his sword high, and slammed the hilt’s steel pommel squarely on the man’s head. Arik moved on before the man’s lifeless body dropped to the ground.
Willem and Simon, on either side of Arik, advanced through the melee. Their swift continuous swordplay moved smoothly from one stroke to the next, whipping through the air. They slashed on the downswing and again on the backswing, sweeping their weapons back into position to repeat the killing sequence. The knight and his soldiers steadily advanced, punishing any man who dared to come near them.
“For Honor!” Logan’s war cry carried from the small camp to Arik’s ears.
Arik stiffened. Both camps were now under attack. He pulled his blade from an attacker’s chest. The body crumpled to the blood-soaked ground. Arik breathed deeply, the coppery taste of blood in the air. “For Honor!” he bellowed in answer. His men echoed his call, arms thrown wide, muscles quivering, the berserker’s rage overtaking them.
The remaining attackers paled and fled headlong into the forest.
Motioning to his men to follow, Arik raced toward the camp. He could hear the shouts, and cursed himself for not seeing the danger. He crested the hill and came to an abrupt halt.
Logan’s sword ripped through the air as he protected Doward. The tinker drew his short blade and did as much damage as he could. But it was the woman Arik noticed. Her skirt hiked up, she twirled her walking stick like a weapon with an expertise that left him slack-jawed. She dispatched the attackers, one by one, in a deadly well-practiced dance. A man rushed toward her, knife in hand. The sneer on his face didn’t match the fear in his eyes. She stepped out of his line of attack, extended her stick to her side, and holding it with both hands swept the weapon forward, striking the attacker across the bridge of his nose. Blood exploded from his face in an arc of fine spray as his head snapped back. Droplets dusted her face creating an illusion of bright red freckles. As he fell, she reversed her swing and caught him hard behind his knees. He went down on his back, spread-eagled. She swung her stick over her head and landed a precise and disabling blow to his forehead that knocked him unconscious.
As she spun to face the next threat her eyes captured Arik’s and held. In the space of an instant, time slowed to a crawl. Her hair slowly loosened from its pins and swirled out around her. His breath caught and his heartbeat quickened as a rapturous surge raced through his body. Something eternal and familiar, with a sense of longing, unsettled him. In the next heartbeat, she tore her eyes away, leaving him empty. Time resumed its normal pace. Another attacker lay at her feet.
Arik joined the fight. 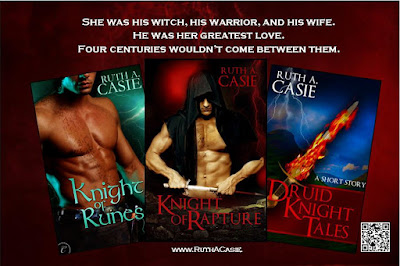