Something Old, Something New...

Posted by: Sheryl Nantus
It's one of those fun times for authors when events collide in a glorious smash-up of events... so let me share them with you!

First, I'm pleased to announce the release on September 3rd of the print release of "Heroes Lost and Found", the third and last book in the "Blaze of Glory" trilogy! 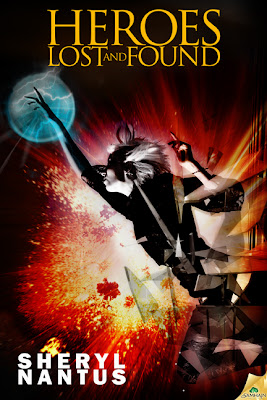 Some will rise, others will fall…

Jo Tanis is still recovering from her near-death experience in Las Vegas when she receives a mysterious postcard from Harris Limox, who claims to have a promising lead on the whereabouts of the Controller. Over her boyfriend/guardian Hunter’s objections, she sets off to a sleepy Oregon town to ferret out the truth.

The Controller is more than just a disgruntled super. He’s a rogue Guardian who was presumed dead and is now armed with a slew of high-tech hardware that not only makes him physically superior to the supers—and therefore almost impossible to destroy—he’s got the ability to detonate the implants in the back of all supers’ necks.

In Oregon, Jo meets a surviving Alpha super, Kit Masters, whose wild plan to capture the Controller could put an entire town of innocents at risk. But instead of successfully talking her former idol out of his disastrous bid to regain former glory, Jo finds herself betrayed and trapped in her worst nightmare.

Fight her former teammates, or die.

And a cover reveal! For "Battle Scars", the fourth book in the "Blood of the Pride" series! Coming out October 28th but available for pre-order at Amazon and Barnes & Noble right now! 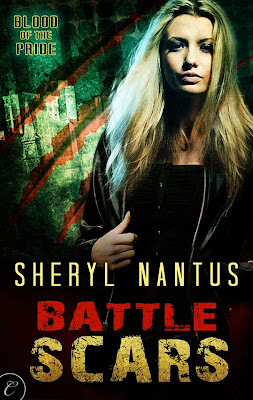 P.I. Rebecca Desjardin is surprised when two seemingly unrelated missing-teen cases land in her lap on the same day. Her cat-shifter instincts tell her there's more to the story, and when she uncovers a bitter feud between the two families, she suspects Romeo and Juliet runaways. She turns to her lover, Brandon Hanover, a man who knows the underground better than most.

is determined to help the woman he loves outwit ruthless enforcers and bring two missing kids to safety, but when a woman from his past resurfaces he finds himself caught between two worlds once again.

As the claws come out and the war between the shifter families turns deadly, the two will have to stand together or fall separately—and even that might not be enough to save them.

And I'm thrilled to announce that I've signed a two-book contract with Carina Press for a new series...  final title TBA but here's the blurb so far!

Tales of the Bonnie Belle

Sam Keller is a woman running from her past, landing as a captain on a Mercy ship—ferrying courtesans from stop to stop to indulge the sexual fantasies and needs of distant mining colonies. She thought she'd left the violence behind but when one of her crew is brutally murdered she has to find the killer before the Bonnie Belle loses enough money to be put out of commission. Marshal Daniel LeClair arrives on base to investigate and the sparks between the two fly both professionally and personally. As the pair weave through corruption and the sensual world of the professional courtesan they find themselves drawn together not only by a need for justice but also for survival in a world where Sam knows the shadows hold dangerous secrets.

This new series will be starting out in 2014 so it's going to be a heck of a finish to 2013 and a jump with both feet into the New Year! I hope some of you will come along for the ride and enjoy a good read with old and new friends!