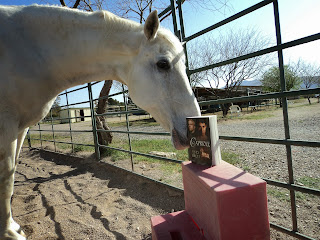 Fall has finally made it to Southern Arizona. Which means it'll be about two or three weeks of lovely temperatures before it gets darn cold. (Yes, it gets below freezing here in the desert. It will get near zero, though rarely. Let me tell you about the burst pipes and frozen, dying trees...)

This is how it went:

See, I managed to get a leg partway over (thank goodness she's a short horse, only 14.2 hands) and Carrma walked away. Having an off-balance monkey on her back made her go faster, so I bailed. Fell on the ground, but not hard enough to bruise. Carrma looks back. Lick chew, lick chew.

Carrma has her quirks. Being a former broodmare, she's bossy. She never was ridden much, and while she has the basics, the finer points need some improvement. (And, admittedly, so does her non-horsey Human.) But Carrma is not an easily spooked horse; she won't run just to be a pest. If she got loose, she'd go to the nearest patch of grass and stop to eat. If she doesn't do something I want her to, it's because I'm not asking right or not listening to what she's trying to tell me. She's a smart pony, and generally when we're in the round pen she'll follow me around, which is great until I want her to stand still. It just took time and patince, but she figured out what I was trying to do, because:

Round 2:
1. Stand on mounting block.
2. Carrma circles around with minimal prompting
3. Get horse parked in front of mounting block.
4. Repeat steps 1-3 until, finally, SUCCESS!

And that 1 is all that counts. Then it was VROOM around the round pen until she got used to carrying me and proved that, yes, she would go where I wanted her to even if she protested a bit, and then we went Out to wander around the barn property. We got to the arena, and VROOM, trot, trot, trot with me bouncing along like a sack of flour. We didn't do much of that, because I am chicken (nekkid horses are a bit slippery) and our steering is not good enough that I trust her to just trot around the arena, which is a large gravel area with no fence, and not go zooming out to the nearest patch of grass.

And because she wanted to go ZOOOM I let her loose in the jump arena,, which is fenced, and off she went to race around, looking good for a 26-year-old mare.

But she was happy, and she got her apple, which had to be shared with her three nosy neighbors. Then big yawns, which means she's relaxed and feeling good after her exercise.

Anyway. Adventures in horse-dom, brought to you by the fact that my e-book LEVADE will be out in paperback here shortly, and Carrma's got a cameo in it, so, you know you want to buy it... 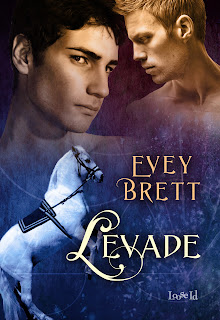