Look at the shiny!

Posted by: Kathleen Collins
So here's something you may not know, writers generally have very little say in their covers. As this is my first book, I nervously checked my email repeatedly when I knew my cover should be coming. Then I got that email and I clicked on the picture...and I fell in love. Seriously, I love my cover. And the main reason I love it is that you know exactly what kind of book you're getting when you see it. And I'll even let you in on a little behind the scenes secret...my heroine has red streaks in her hair in this book so I love all the red on the cover because I feel it ties in with that.

So what's the verdict? Does it make you want to pick up the book or would you give it a pass? 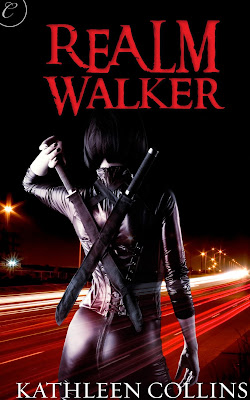 An estranged mate, a mangled body and a powerful demon who calls her by name…

As a Realm Walker for the Agency, Juliana Norris tracks deadly paranormal quarry using her unique ability to see magical signatures. She excels at her job, but her friends worry about her mysterious habit of dying in the line of duty without staying dead. That's only the first of her secrets.

Even as Juliana pursues the demon, it goes after all she holds dear—including Thomas, who is back to claim her for his own. But if she can't reconcile her past and learn to trust herself again, she will lose him forever.

Kathleen Collins is working on a new book while anxiously awaiting the release of her first one. You can find her here kathleencollins.net or follow her on twitter at @kathy_collins