Interested in trying a new book full of magic and monsters...for free? Each Wednesday for the next five months, Here Be Magic will give away a book from a different one of our fabulous authors. It's Win-A-Book Wednesday! Now through February of 2014, we'll post a new surprise book on Wednesday, allow entries through Sunday night, and announce the winner in Monday's Here Be News. We have a fabulous line up of authors, from debuts to old favorites, including: David Bridger, Joely Sue Burkhart, Angela Campbell, Sonya Clark, Kathleen Collins, P.G. Forte, Jax Garren, Angela Highland, Shona Husk, Jeffe Kennedy, Jane Kindred, Nicole Liuken, T.C. Mill, R.L. Naquin, Janni Nell, Cindy Spencer Pape, Veronica Scott,  Eleri Stone, Shawna Thomas, Steve Vera, and Jody Wallace. Authors here are listed alphabetically, not by week. You'll have to be here on Wednesdays to see who's up next! Good luck! 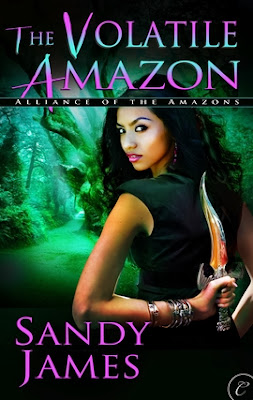 Book four of Alliance of the Amazons

Sarita Neeraj has never felt like a real Amazon. Compared to the obvious strengths of her sisters, her Water powers seem as small as her stature. She's determined to prove herself--unfortunately, all that gets her is captured by an enemy.

Ian serves a twisted goddess, preferring this to an empty afterlife. He's taken Sarita hostage to coax the other Amazons from their safe haven. But in his ancient Scottish castle, the passion and love Ian finds for Sarita resurrect his honor, until he chafes at the dark will of his mistress.

Sarita has finally found happiness--but before she can enjoy it, she's "rescued" by her furious sisters. To save Ian from destruction at the hands of the Amazons, Sarita must risk wielding magick that could change her very nature. Only then can she prove the Water Amazon is the strongest of the four--and save them all from destruction.

Meet Earth, Fire and Air in The Reluctant Amazon, The Impetuous Amazon and The Brazen Amazon.

Join us Saturday for our first movie night on twitter! We'll be watching "Fright Night." Details on how to participate can be found here.