Setting Goals - and Sweetening the Pot 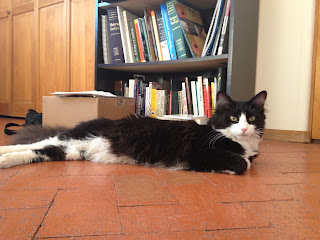 Because our Here Be Magic blog schedule coordinator, Veronica Scott - known affectionately as BLOGZILLA - is a big fan of my cat, Jackson, I had to throw in a pic of him here.

Those of you who read my personal blog will know that I've been working diligently to meet an April 1 deadline. This is for my 90K novel, which is a modern-day retelling of Phantom of the Opera. I sold it on proposal to Kensington just before Christmas. When I talked to my new editor, Peter Senftleben, I said I thought I could have it done by end of March.

He was all pleased and said that was much faster than he expected.

I've been tracking how fast I can write for quite a while now and had figured this by my formula of approximately 1,000 words/day. I usually write quite a bit faster than this - I try for 1675/day - so this gives me room for occasional missed days and revisions. I tend to revise as I go, so when I'm done, I'm pretty much done.

My regular readers also know that I'm a spreadsheet queen. I love Excel and conditional formatting, so I use it to set all kinds of daily, weekly and monthly goals. I'm also setting up annual goals now, too. Eep.

For my day job, too, my company is in the thick of annual performance evaluations, so we're all about the SMART goals (Specific, Measurable, Attainable, Relevant and Time-sensitive). We also have Stretch goals - ones that maybe aren't so easy to attain.

So, to relieve your suspense, just in case you were worried, as of today, March 26, I have 2700 words left, all wrap up. The hard part is done. I'll do some smoothing, send to the critique partners and agent for a quick read (they've already seen chunks) and I'll make my deadline.

But it's kind of close, you know?

Closer than I thought it would be. A number of things cropped up, including an emergency trip to see my failing father-in-law. That sort of thing.

What happened along the way though is: I missed quite a few goals. And I just hated that feeling. In fact, I got so far behind on some of my interim goals, that I started to feel bad about myself.

It reminds me of this article I read a while back - and that stuck with me, so I've quoted it often - about search and rescue dogs working disasters like earthquakes. The dogs are trained to find people in the rubble, but after a while, after they find corpse after corpse, the dogs get depressed and don't want to look anymore. So the handlers have living people hide themselves, so the dogs can "find" them and it renews their excitement for the job.

I realized that, while it was good to set high goals for myself - that "Stretch" thing - that I also need to make sure I have some easily attainable ones, too. Just to keep my doggie self happy.

We all need to guarantee ourselves some successes along the way, to sweeten the journey a little.