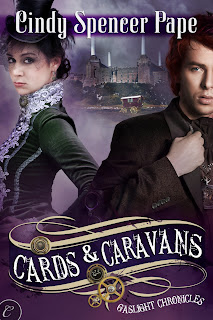 What was your life like growing up? I had a grand childhood, the only son of a Knight of the Round Table, knowing I could grow up to be a Knight myself. My two sisters kept me on my toes, along with the Irish wolfhounds my family raises at Kay’s Tower, our Scottish Lowland estate. Living in an age of steam power and magickal abilities, I’ve always known that anything could happen.

Before the action in the book, what were your plans/hopes for the future? Well, at one time, I planned to marry Miss Winifred Hadrian, but she fell in love with that werewolf Inspector, Liam McCullough. I thought myself broken-hearted and threw all my energy into my work for the Order, helping keep Britain safe from vampyres and the like.

What changed that? Ah, then I met Belinda, about to be burned for a witch. Although I married her to save her from that fate, I soon discovered that I’d never really been in love before.

How would you describe your personality? Most folks think I’m a devil-may-care adventurer, always full of jokes and antics. My Belinda knows I have a serious side. I’ll fight to the death for the people I care about.

Do you have a motto or code you live by? Well, now, the code of chivalry was a strong part of my upbringing as a Knight. Mostly I believe in protecting those who need it and being kind to anyone less fortunate than myself.

What one thing would you take to a desert island? Other than a working airship? Or my bride? I suppose my sword. Pistols run out of ammunition.

Where would you go on vacation? Vacation, you say? (Scratches head.) Oh, you mean a holiday. Well, we go down to London from time to time. I visit my sister Genny and her family in the Hebrides. But I do like to travel. Anywhere Belinda wants to go is fine with me.

What is your most distinguishing characteristic? I suppose the hair, which my mother calls auburn and my father calls ginger. I’m a big man, but neither of those is uncommon among Scots. Belinda says I have nice knees when I’m clad in a kilt.

What is your major skill or talent? I’m a decent hand with magick, sword, or pistol.

What’s your favorite color? Favorite food? Green I suppose, for the rolling hills of my home, or the soft purple of the heather. As for favorite food, I’ve a sneaking fondness for sugared walnuts.

If you had to pick another career, what would it be? Well, I’m not much for literature or the sciences, but I suppose Liam would take me on as a constable if I asked nicely.

What’s on your bucket list? (After having that term explained, Connor shrugs.) I’d like to see my children grow up. Travel a bit. Experience all the new adventures the age of steam has to offer.

Which actor or actress would you want to play you in the movie? I’ve no idea what that means, but Cindy, the scribe of my tale, seems to think someone named Tom Hopper would do the trick. Apparently he's an actor who's played Sir Percival, another Knight. (In Merlin--ed.)

Who are your closest friends? Sir Tom Devere, a fellow knight of about my own age. His foster family, the Hadrians, especially now that I no longer think I’m in love with Winifred. Her husband, Liam, is a good friend as well.

Who do you love? My Belinda. Our future children. My parents, grandparents, nephew and sisters.

What are your future plans? One day I’ll inherit the family estate and my grandfather’s baronetcy. I already help manage the lands. Between that and hopefully moving up within the Order, I ought to have a busy life. All I really care is that Belinda is by my side.


Contest: In conjunction with the release of Cards and Caravans, Cindy is running a contest for a $25.00 gift card to the e-book distributor of your choice, plus the chance to name a character in the next Gaslight Chronicles story. To enter, visit the “Contact Cindy” page on her website and send her a note. Mention which blog you saw this on, and some tidbit about the post. One entry per person per blog post. A list of posts is available on the Contest page on Cindy's site.

About the Book: Cards and Caravans is book 5 in the Gaslight Chronicles steampunk romance series, and releases from Carina Press on March 18. Find out more here.

Blurb: Belinda Danvers isn't a witch. But that won't stop them burning her at the stake...
Connor McKay can tell at a glance that Belinda's magickal powers are minimal at best. She can't be guilty of murdering village children. There's something suspicious about her arrest and lightning-quick sentence. Unfortunately, telling anyone how he knows would mean revealing his own powers. He's been sent by the Order of the Round Table to help and he can't just let her die.

Escaping from jail and running from vindictive villagers in her grandfather's steam-powered caravan is more excitement than Belinda's had in years. And despite the danger--or maybe because of it--she loves the time spent with her sexy rescuer. But there's more to his magick than he's letting on...

There's something going on that's bigger than the two of them. It's time for good to make a stand.

Review: 4 Stars from Romantic Times: “All the trappings of a good steampunk novel are here..but most enchanting of all is the love that develops between the hero and heroine. 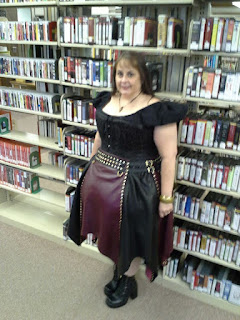 About the Author: Cindy Spencer Pape firmly believes in happily-ever-after and brings that to her writing. Award-winning and best-selling author of 16 novels and more than 30 shorter works, Cindy lives in southeast Michigan with her husband, two sons and a houseful of pets. When not hard at work writing she can be found dressing up for steampunk parties and Renaissance fairs, or with her nose buried in a book. Catch her online at:
Website: http://www.cindyspencerpape.com
Blog: http://cindyspencerpape.blogspot.com/
Newsletter group: http://yhoo.it/ni7PHo
Twitter: http://twitter.com/CindySPape
Facebook: http://on.fb.me/gjbLLC