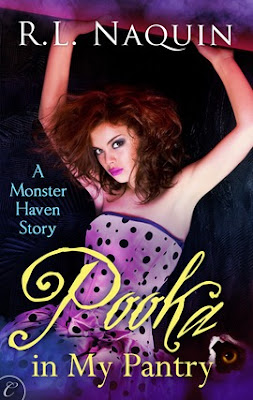 Zoey Donovan--empath, wedding planner, go-to girl for monsters with personal problems--has been marked twice for pickup by Death. On both occasions, Riley the smoking-hot reaper has refused to follow through. For his breach of protocol, Riley is now on probation. For her refusal to die on schedule, Zoey's right to live is challenged. She will have to undergo a life-or-death trial, but she won't know when or where it will happen...

Staying alive might not be so difficult if the Leprechaun Mafia hadn't strolled into town. Now every business owner with the slightest connection to the supernatural community is being threatened with the most appalling bad luck if they don't pay up. Mirrors are smashed, bodies are dropping, and Zoey's still got clients waiting for fabric samples.

With a little luck, she might be able to save everyone and still have time for a second attempt at a decent first date with her favorite reaper.

Find out how it began in Monster in My Closet, available now!

The new Star Trek trailer. I'm so ridiculously excited to see this:

Books aren’t dead yet: "Self-publishing fans and the tech-obsessed keep getting it wrong: Big authors want to be in print -- and bookstores."

Headed to RT this year? 2013 RT CONVENTION OUTFITS: ELISA'S PICKS Apparently I have shopping to do.

Jody Wallace w/a Ellie Marvel contracted a hot contemporary romance with Entangled Publishing for their Ever After novella line. "Kiss the Bride" should be released in July 2013.