Take an extra 10% off Eliana this week at Loose Id!

While my new book, Eliana, is set in the same world as my previous books (and features a character from Levade), there are no horses in this book. My mare Carrma is somewhat displeased, but I have mollified her by taking her lots of apples. 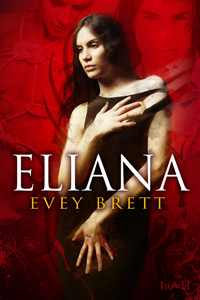 Thinking back to the inspiration for this book, Eliana whas a character I had created for an ill-fated sequel to my first demon book, Demon's Dance. She was a dominant, no-nonsense kind of woman who knew both how to inflict pain and how to help others heal from it. I didn't want to give her up and started thinking about how she might have gotten involved with the Wardens--a group of men and women dedicated to hunting incubi and aiding their sexually promiscuous offspring. And, more importantly, why and how she became a dominant.

In one way, this book is Eliana's origin story, but  after finishing Levade I realized how Eliana could mesh with Konstantin, one of the characters introduced in that book, and that became an interesting story in itself--how does the son of a crazed Nazi geneticist become a healer as well as a submissive, and what lasting effect will that have on him?

So despite the title, Eliana isn't just about Eliana. There's Kon, and his male dominant, Dane, and all sorts of learning and growing and healing for all three.

Oh, and sex. Did I mention there's lots of sex?

Also--now available from Amazon and Barnes and Noble: Love, lust and Lipizzans. Capriole. In PRINT!!!!

Carrma sez, "Buying my human's books will help her make sure I have enough hay to eat and a warm blankie during freak snowstorms in southern Arizona. Plus you get to read about Lipizzans like me."