You know what they say about redheads…

Posted by: Shona Husk
Yep, I get that all the time. I’m the only redhead in my family and I have dyed my hair everything from blond to black to blue (don’t ask). While I never thought I was scarred it wasn’t until I’d written quite a few novels and novellas that I realised I’d never written anyone with red hair.

Not even a secondary character.

Natural red hair exists in about 2% of the population (higher in Scotland and Ireland). I’m sure blond or brunette writer don’t worry about the hair color of their heroine. So when I started DARK VOW and I was wondering what the heroine, Jaines, should look like I thought it was high time to embrace having red hair and write about a redhead.

Being fantasy I could ignore the stats on redheads and I went for broke. Red hair is ordinary and nothing special in Westly County—Jaines even has lilac eyes, which are again common. Jaines wouldn’t stand out in a crowd. (Imagine growing up with Ranga jokes and being called blue—it’s an Aussie thing)

Of course now I’ve populated the Westly County with redheads every time I write a story there I have to keep this in mind. So eventually I’m going to have to write a hero who isn’t tall dark and handsome…he’ll have to have red hair. Gulp.

Have you avoided certain hair colors for your hero and heroine? Or as a reader how important is hair color? 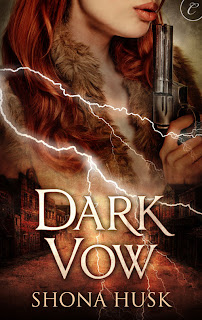 Jaines Cord plans to kill the man who murdered her husband, even though killing a Bounty Hunter is said to be impossible. One bullet took away her livelihood, her home and her love. One bullet made by her. Fired from the gun she completed for the Arcane Bounty Hunter.

Obsidian wears the scars of disobeying the powerful Arcane Union. He barely escaped with his life and now lives quietly, in a town the lawmen forgot. When Jaines arrives asking too many questions, he's faced with a decision. Help her or run…again. Obsidian knows that if he flees he'll always be looking over his shoulder. His name is one of the first on the Bounty Hunter's death list.

Yet when Obsidian is offered an opportunity to stop the stone taking over his body in exchange for retrieving the gun, he asks Jaines for her help. Now Jaines must choose: a dead man's vengeance or a living man's hope?