The Magic of Stories

Posted by: Ruth A Casie
Stories are an important part of our society and culture. We find stories in the books we read, movies we watch, painting we study, music we listen to, even in the news of the day and the liturgy of our religion. You can see its impact on the people in every culture whether being listened to or told and even re-told. Storytellers have shaped our society and our ways of thinking. Their stories are used to entertain, teach, and pass on knowledge and wisdom. Stories define our values, desires, dreams, as well as our prejudices and hatreds.

No one knows when story telling began. All we know is that it is an ancient well respected art and played an important part is society. We can only guess what promoted the first story. Perhaps a hunter came back from the hunt and told of his heroic deeds or was it to explain why he came back from the hunt empty handed? Did a mother try to calm a child’s fears or doubts? Did a Shaman or tribal leader tell of an important event? The storyteller held an important position in these early societies. They were typically the priest, judge or ruler. People found their stories interesting and listened to them. Storytelling days were considered important.

Before man learned to write, he had to rely on his memory to learn anything. For this he had to be a good listener. With the importance of the story established, the listeners paid close attention. These stories were not only told amongst themselves but, when people traveled they shared their stories with others in faraway lands when they traveled. And when they returned home, they brought back exciting new stories of exotic places and people.

The oldest surviving story is believed to be the epic tale of Gilgamesh. This story tells of the deeds of the famous Sumerian king. The earliest known record of storytelling was found in the Egypt. Cheops’ scribes recorded the stories told by Cheops’ sons who told their father stories to entertain him.

There are all kinds of stories myths, legends, fairy tales, trickster stories, fables, ghost tales, hero stories, and epic adventures, and that over time these stories were told, and retold. Passed down from one generation to the next, these stories reflect the wisdom and knowledge of early people. Stories were often used to explain the supernatural or unexplainable, confusing events and disasters. It was common for people to believe in the stories of gods that bound them to a common heritage and belief.

Most historians and psychologists believe that storytelling is one of the many things that define and bind our humanity. Humans are perhaps the only animals that create and tell stories.

Tell me your favorite story in a comment and your email address here and win a free copy of Knight of Runes (epub or pdf format), a new story by Ruth A. Casie.   One person will be randomly selected on November 20.

The characters are strong, vibrant, true to their nature, and albeit very heroic.  The author, Ruth A. Casie, weaves an exciting and beautifully told legendary tale that is both rich and engaging.  It is full of, ‘on the edge of your seat’ suspense, mind-boggling drama and a forever-after romance. Ms. Casie's sparkling new novel, KNIGHT OF RUNES is a winner! ~ Romance Junkies – 5 Blue Ribbons

I totally enjoyed this time travel romance. I actually felt like I was Rebeka immersed in her adventure. I found this book well written, warmhearted and believable. I loved the use of runes, magic and ancient Druids as part of her plot. The romance was heartfelt and not overly mushy. ~ Bookloons – 3 Books 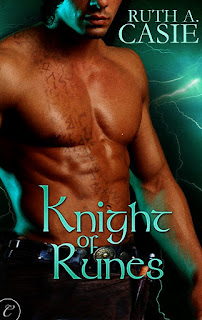 It’s the 21st century and time travel is still a Wellsian fantasy but not for Rebeka Tyler. While on an impromptu tour of Avebury, she takes a misstep at the standing stones, and finds herself in the right place but tossed back into the 17th century. When Lord Arik, a druid knight, finds Rebeka wandering his lands without protection, he swears to keep her safe. But Rebeka can take care of herself. When Arik sees her clash with a group of attackers using a strange fighting style he is intrigued.

Rebeka is desparate to return to her time. She poses as a scholar sent by the king to help find out what’s killing Arik’s land to get access to the library. But as she decodes the ancient runes that are the key to solving his mystery and sending her home, she finds herself drawn to the charismatic and powerful Arik.

As Arik and Rebeka fall in love, someone in Arik’s household schemes to keep them apart and a dark druid with a grudge prepares his revenge. To defeat him, Arik and Rebeka must combine their skills. Soon Rebeka will have to decide whether to return to the future or trust Arik with the secret of her time travel and her heart.