The World of What-If?


It’s probably no accident that the two school subjects I enjoyed most were History and Science. I’m sure it goes a long way toward explaining why I love Steampunk so much. It is, after all, a genre that begins with a nostalgic look at the world as it used to be, then asks that ever-intriguing question: What if?

What if steam power had won out over gas? What if Charles Babbage had been able to fund his inventions, and computers had been readily available in 1812? What if the Hindenburg had never crashed and lighter-than-air travel had become the norm?  Or…what if the transcontinental railroad had never been built? What if wireless electricity had been discovered? What if the Louisiana Purchase had never been made, or hostilities between France and Britain had never ended?  What would our world look like then?

Of course there are countless questions you could ask, and endless ways in which the world around us might be different today—and that’s one of the things I love most about the stories included in the A Clockwork Christmas anthology. Each story is a unique melding of the past and the possible. Grounded in pseudo-science and altered-history, each one offers its own distinct version of a world that’s just a little bit different than our own.

There is one constant that unites these worlds, however, and that’s the people who populate them. Despite the fictional technology that contributes to our stories and that help to make some of our characters the unique specimens they are, they’re all still recognizably  human. They all want love. They all struggle, to a greater or lesser degree, for happiness. And, this being Romance, after all, they all demand their HEA.That might be my favorite part of all. 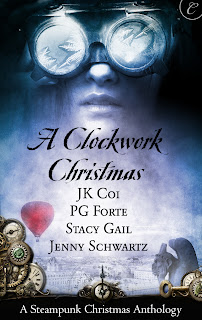 We Wish You a Steampunk Christmas

Changed forever after tragedy, a woman must draw strength from her husband’s love. A man learns that love isn’t always what you expect. A thief steals the heart of a vengeful professor. And an American inventor finds love Down Under. Enjoy Victorian Christmas with a clockwork twist in these four steampunk novellas.

Crime Wave in a Corset by Stacy Gail
This Winter Heart by PG Forte
Wanted: One Scoundrel by Jenny Schwartz
Far From Broken by JK Coi

To keep up with the fun and laughter and sheer silliness of our pre-release celebrations, please join us on the A Clockwork Christmas Facebook page.