Posted by: Jane Kindred
Last weekend at World Fantasy Convention 2011 in San Diego, I attended a panel on "The Not-So-Fair Folk," in which the dark side of fae folklore was explored. The importance of keeping mum about the fae was mentioned more than once, making the panel itself feel just a bit dangerous, as if talking about it just might land us all in trouble.

Like the fae themselves, the darker tales are often hidden among the seeming light. In Disney's Sleeping Beauty, the fairies are portrayed as benign and somewhat daft—except for Maleficent, who appears uninvited at the christening of newborn Princess Aurora to "gift" her with a curse after being denied the proper respect. As a child, I was always much more interested in Maleficent than anyone else in the story. Why was she so different? Why didn't they invite her? What was her history?

Another favorite of mine was the Snow Queen. She swept in with the north wind and stole away pretty boys to keep for herself. I was instantly intrigued.

When I was a little older, I discovered the White Witch in C.S. Lewis's The Lion, the Witch, and the Wardrobe and recognized her as the same figure, as she turned the world to eternal winter and brought Edmund under her thrall from her sparkling sleigh. And then again in The Silver Chair, the Lady of the Green Kirtle came along and stole away and enchanted Prince Rilian of Narnia.

These mysterious, powerful women are all nods to the Queen of the Fae, who was prone to stealing human children and replacing them with changelings, or captivating the hearts of mortal men who followed her into the unseen kingdom of the fairies. The fear of a powerful woman seems to infuse men's psyches in the oldest of folklore of many traditions. From sirens and mermaids to veela and rusalki, all of them lure men to their hidden realms. (Which I guess pretty much speaks for itself.)

As much as I love my protagonists, I can never quite resist a strong and dangerous woman. When I started my current series, The House of Arkhangel'sk, I had no intention of writing about dark fae. It's a story about angels and demons, and the Russian imperial family. But somehow as I was developing the villainess of the story, I ended up with none other than the Fairy Queen herself. She was the perfect enchantress to lead my fallen angel astray. 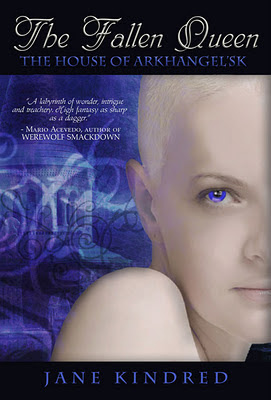 I took some liberties, of course. My Fairy Queen comes from a Celtic tradition (the same that inspired C.S. Lewis—the ballad of Tam Lin; as well as Irish poet Brian Merriman's The Midnight Court), but I moved her to the icy Russian north and gave her the qualities of a Slavic veela. Her origins, however, are something I haven't explained. Queen Aeval remains a bit of a mystery. Somehow, it didn't seem appropriate to talk about where she came from. Maybe subconsciously, I, too, was afraid to delve too deeply into her realm, or at least to speak of it. You never know what she might do.

If you dare to speak of the unseen, feel free to leave me a comment about your favorite fae. I'll give away a signed ARC of Book One of The House of Arkhangel'sk, The Fallen Queen, to a commenter chosen at random.