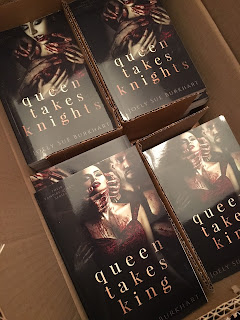 I don't think I'll ever get tired of opening up a box of my books!  This one contains a bunch of QUEEN TAKES KNIGHTS and QUEEN TAKES KING. If you'd like to win signed copies of both, comment on this post with any new habits you've implemented this year and how well that's going. I'll ship internationally!


A lost virgin vampire queen.
Two vampire knights sworn to protect her.
It’s about to get very hot… and bloody…
Ever since her mother was murdered by monsters five years ago, Shara Isador has been on the run. Alone, scared, and exhausted, she’s finally cornered in Eureka Springs, Arkansas. Out of hope with nowhere else to turn, she’s ready to end it all when two men come to her rescue.
They say she’s a lost queen descended from Isis, and they’re her Blood, vampire knights sworn to protect her. It all seems like a crazy nightmare, until the alpha offers his blood. Then she realizes she’s never wanted anything more. Except maybe his body… and his friend’s, too.
But they’re not the only ones searching for a lost queen. Shara must learn how to wield her new powers quickly and conquer her fears if she intends to keep them all alive.
QUEEN TAKES KING
How many Blood will come to the vampire queen’s call… and will they be able to protect her from the king?
For the first time in her adult life, Shara has plenty of money thanks to the Isador legacy–and she’s not alone. Daire and Rik are devoted lovers, but they know other Blood are coming. Blood who may challenge Rik for the coveted alpha spot at her back.
As her power grows, so does her hunger. But without fangs, she fears she’ll never be the queen her Blood expect. More Blood means power struggles and complications, and she has no idea how to keep everyone happy. Worse, her dreams are quickly becoming something to fear.
Moving to establish her permanent nest, she can’t stop dreaming of the king. A massive monster. Chained in darkness. Lost to madness. He roars with fury in her dreams, demanding his release.
But is he the key to unraveling her own mysterious past–or the most dangerous threat of all?