A New Year, a New Release, and a #Giveaway!

Posted by: Marie Harte
Happy 2018! To celebrate the new year, I have a new release out! 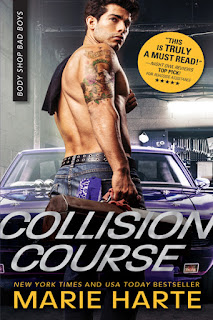 Today is release day for Collision Course, the fourth and final (?) book in the Body Shop Bad Boys series. It’s a fun and sexy book featuring a two characters who need each other more than they know. Add in an adorable little boy, nosy mechanics, and a ton of Cortez female relations, and you’ve got a book guaranteed to keep you glued to the pages.

Harte is astounding in her ability to write with such vivid imagery. Each scene is rich with detail, and readers will feel like they are experiencing each situation with the characters. Aside from the story, which is rich in depth and revelations, the sex scenes are thorough and might entice a shiver or two.  RT Book Reviews, 4 stars


He’s always had a way with the ladiesShe won’t give him the time of daySparks fly when two hearts in motion collide.
Florist Joey Reeves is working overtime to stay away from Lou Cortez, the ace mechanic with a reputation for irresistible charm. She’s a single mom with enough on her plate―the last thing she needs is entanglement with the hottest guy in town…
“Well, hello there.”
Joey glanced up and froze. The man who’d been haunting her sleep looked even better in the hard light of day.
“H-hello.” She coughed. The guys who worked at Webster’s Garage all looked larger than life, covered in tattoos, muscles, and that indefinable sense of danger they wore like a second skin. But this guy, the tall, Latin lover with dark-brown eyes and lips made for kissing, who had snared her.
Amazon  |  B&N  |  iBooks  |  Kobo  |  More
Excerpt:

Determined to start over again, she dug into her orders and updated delivery times, getting in touch with their new delivery guy, a cute twenty-year old who’d no doubt soon be rolling in tips.
“Well, hello there.”
She glanced up from the counter and froze.
“You work here?” A large grin creased a face she’d tried hard to forget.
The man who’d been haunting her sleep, who’d dogged her through a wedding and sizzled her already frazzled nerves, looked even better in the hard light of day.
“H-hello.” She coughed, trying to hide the fact that her voice shook. When she could breathe without hyperventilating, she said, “Sorry. What can I do for you today?”
The look he shot her had her ovaries doing somersaults and her brain shutting clean off.
The first time she’d seen him had been on a visit to her first wedding client ever, and she’d been floored. The guys who worked at Webster’s Garage all looked larger than life, covered in tattoos, muscles, and that indefinable sense of danger they wore like a second skin. But it had been this guy, the tall, Latin lover with dark brown eyes and lips made for kissing, who had snared her.
He had a way of raising one brow in question or command that turned her entire body into his personal cheering section.
“…for some flowers. I dunno. Something that looks like I put thought into it?”
Focus, Joey. Be professional. This isn’t personal. Don’t get all gooey on the man. “Ah, budget?”
He sighed. “For Stella, it has to be decent. Girl is like a human calculator when it comes to anything with value. If I skimp, she’ll know,” he said, still grinning. He took the binder she slid to him and leafed through the floral selections. “I’m Lou Cortez, by the way.”
“I remember.” He’d only introduced himself once, months ago in the garage while she’d been going over flower choices with his boss. But Joey had never forgotten those broad shoulders, chiseled chin, or bright white smile. Talk about too handsome for her own good.
She’d kept her distance, or at least tried to. She’d been invited to the wedding, having become friends with the bride. Of course, all the woman’s employees had been invited as well. Joey had done her best to steer clear of the man women seemed to drool over. Talk about trouble she didn’t need.
She realized he’d stopped looking through the binder and stared straight at her. More like through her. Wow. How did he do that? Bring so much concentration and intensity she felt as if his gaze reached out and wrapped around her, holding her still?
And why, when confronted with all that masculinity, did she want to stammer and obey any darn thing he said? She had to force herself to be strong, to speak. But she just stared, mute, at so much male prettiness.
His smile deepened. “And your name would be…?” God, a dimple appeared on his left cheek.
A dimple. Kill me now. Breathe, dummy. You can handle this. It’s business. “Oh, right. I’m Joey.”
“You don’t look like a Joey,” he murmured.
Her heart raced, and she forced herself to maintain eye contact. “Short for Josephine. So the flowers. Did you find anything you like?”
A loaded question, because his slow grin widened as he looked her over. 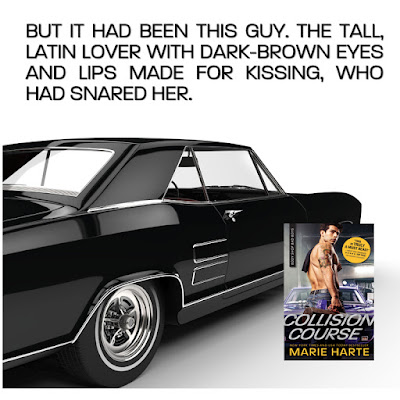