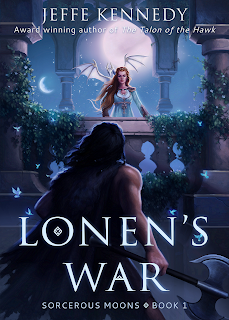 I have a new book in a new series out today!

LONEN'S WAR kicks off a new Fantasy Romance series, Sorcerous Moons. I did it on my own (self-published) because my agent felt the story concept too closely paralleled that of THE MARK OF THE TALA.

I can see it. Marriage of convenience between rulers of warring nations just really rocks my fantasy romance heart. What can I say?

And I really wanted to tell this story, particularly a very slow-burn romance. Also, caveat: as some reviewers rightfully point out, this first book has no heat and very little romance, because slow burn.

Oh yeah - we'll get there, people.

This review tickled me no end:

If you like stories of overlooked princesses coming into their own in spite of withering expectations, you will love Lonen’s War. Likewise if you enjoy epic fantasy with lots of political skullduggery, ( like The Goblin Emperor and Sorcerer to the Crown) because this book certainly fills that bill as well.
And if you are a fan of Jeffe Kennedy’s Twelve Kingdoms series, you are going to absolutely adore this.

I hope you all DO adore it! It really hits my own personal sweet spot.
An Unquiet Heart
Alone in her tower, Princess Oria has spent too long studying her people’s barbarian enemies, the Destrye—and neglected the search for calm that will control her magic and release her to society. Her restlessness makes meditation hopeless and her fragility renders human companionship unbearable. Oria is near giving up. Then the Destrye attack, and her people’s lives depend on her handling of their prince…
A Fight Without Hope
When the cornered Destrye decided to strike back, Lonen never thought he’d live through the battle, let alone demand justice as a conqueror. And yet he must keep up his guard against the sorceress who speaks for the city. Oria’s people are devious, her claims of ignorance absurd. The frank honesty her eyes promise could be just one more layer of deception.
A Savage Bargain
Fighting for time and trust, Oria and Lonen have one final sacrifice to choose… before an even greater threat consumes them all.
BUY IT NOW