Most Romantic Novels We've Ever Read and Why

Veronica sez: Today we at Here Be Magic are sharing our thoughts on the most romantic novels we've ever read, and what made the books so special. We wish you a Happy Valentine's Day and please feel free to share your favorites in the comments! We're giving away two $10.00 Amazon gift certificates to two randomly selected commenters here on the blog (winners to be notified  after 7AM PST on February 15th and announced here.)

I'll lead off, since I also talked about this subject over at USA Today Happily Ever After, where authors including Nalini Singh shared their favorites. Here's what I had to say:

I myself have two favorite choices, based on the fact that I reread both often.

First,  by Grace Draven. I absolutely LOVE Brishen and , from their first meeting in a garden through all the good and tumultuous times they endure. The world building is wonderful and the way these two people from totally different races enter into a political marriage that becomes a love match touches my heart.
And then ’s Shield of Winter. I’m fascinated by the story of , an Arrow assassin from her Psy-Changeling series, who falls in love with the Empath Ivy Jane, despite the fact he thinks he has no capacity for emotion, much less love. I’m particularly drawn to the way Nalini subtly and gradually shows the thawing of Vasic’s heart early on in the novel. Despite himself, the hero is fascinated by Ivy, which turns into a desperate love over time. One tiny detail — the two often sit on Ivy’s porch in the evening and the first time Vasic sits a foot or so away from her. Each time they sit down he unconsciously moves closer. 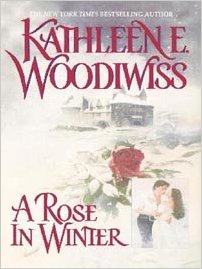 Linda Mooney, author of The Gifting: The most romantic novel I ever read was among the first A Rose in Winter by Kathleen Woodiwiss. I believe I fell in love with this book because it echoes a well-known trope that I still enjoy, namely Beauty and the Beast, and it was one of the first historical romances I read. Another book with a similar theme comes in a close second - Night Magic by Charlotte Vale Allen. Not only does this story give us a contemporary version of the beauty/beast theme, but it also has a strong resemblance to Phantom of the Opera. I highly recommend both if you love those story lines.
ones I came across when I was a teenager. It is

Cindy Spencer Pape, author of Where There's Smoke: This question threw me for a loop. I've been reading romance since I used to sneak my mother's Harlequins into my desk in 4th grade. Over the years, that's literally thousands of romantic books. Jayne Anne Krentz? Elizabeth Peters? Roberta Gellis? Nora Roberts, Elizabeth Lowell? Linda Howard? Kathleen Woodiwiss? Who to choose? I may upset some of my colleagues by saying I despise some of the commonly cited "romantic books". Romeo and Juliet were both, literally, too stupid to live. Rhett Butler and Scarlet O'Hara were jerks who deserved each other's crap. So, what, I pondered, really stood out to me after so many years, and so many books? Then I got it.  The Scarlet Pimpernel. I've loved that book since I read it in Junior High. Percy can't tell Marguerite, his wife and the love of his life, that he's a spy, sneaking refugees out from under the regime of the French Revolution, because she just might be a spy for the revolutionaries. So he has to let her think he's a useless, idiotic fribble, along with the rest of society. The scene where they argue, then when she walks inside, he kisses the stairs where she stepped has stuck with me over the decades as one of the most tender I've ever read.

Shawna Reppert, author of Raven's Heart: The most romantic novel ever? Pride and Prejudice, without a doubt. That moment when Lizzie finds out that Darcy, secretly and therefore without any expectation of reward or reciprocation, goes to great trouble and expense to save her family from the ruin that would have been brought on otherwise by her foolish younger sister? <swoon>. I also love that the charming young Wickham turns out to be a rake while the taciturn Darcy, judged by everyone to be a prideful, unpleasant man, turns out to be the true gentleman.  I have always been fond of the misjudged hero. As I think about it now, it's just possible that an early imprinting on Darcy may have somewhat influenced my own protagonist in the Ravensblood series.  (Though Raven is a far darker hero with more to overcome than mere ballroom rudeness.)

And let's not forget Lizzie.  In an era where the only hope of an unpropertied young woman was to marry well, she had the fire and strength to turn down proposals that would have seen her well-settled financially when she felt that love and respect weren't possible.

Janni Nell, author of Darkwood: The most romantic book I've ever read is The Time Traveler's Wife by Audrey Niffenegger.
This book is simply sublime. As well as being an original take on the time travel theme, it's a beautiful and deeply moving love story. The author's idea of exploring the characters and their relationship by having them meet at different ages is inspired. And that ending. OMG! It still gives me tingles. If you've never read this book, what're you waiting for?


Please take a moment to tell us in the comments what your favorite romance novel is!