Portrait of an Unseelie bard 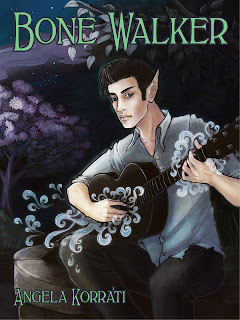 A friend and reader sent me a link to this story on the newspaper site for the Lexington Herald-Leader, a nice little local color piece about how a bunch of locals gather to make music at a Hardee's restaurant. She thought it'd be relevant to my interests since one of the participants is a gentleman who moonlights as an Elvis impersonator, and she even clipped the picture out of the physical newspaper and sent it to me!

To wit: hurray! A reader thought of me! Thank you, Nancy!

But I do want to talk about what she sent me, because she hand-wrote the question "Elessir?" on the clipping. Since, of course, I have Elessir a'Natharion, Unseelie bard and self-appointed Elvis impersonator, as a major character in Faerie Blood and Bone Walker.

But here's the thing—if you click through to the article, you can find the guy in the carousel of photos. Like pretty much all Elvis impersonators in my experience, he's doing 70's-era Elvis, the Elvis of jumpsuits and scarves.

For the record, Elessir a'Natharion never, ever impersonates 70's-era Elvis.

Part of this comes from my own history as an Elvis fan, and part of it comes from Elessir's in-character experience with Elvis' music.

The part of this that comes from me is that every single time I've seen Elvis impersonators depicted in popular culture, whether on TV or in a movie, it's always played for laughs. And it's always 70's-era Elvis, in full gaudy jumpsuit and scarf glory. The impersonator does up his hair and practices a sneer and drawls "Thank you very much" in as thick a drawl as they possibly can.

I can think of two examples of this off the top of my head—one, an episode in Lois & Clark: The New Adventures of Superman back in the 90's, wherein all the cast were inundated with pheromones that lowered their inhibitions. Now, in this version of the Supes storyline, Daily Planet editor Perry White is portrayed as a devout Elvis fan, and I was down with that; I found how he frequently swore "Great Shades of Elvis!" kind of adorable. But in the pheromone episode, what does he do? He slaps on a jumpsuit and a scarf, and tries to imitate Elvis. And it was cringe-inducing for me.

Another example is in Castle, in the episode "Heartbreak Hotel", where Castle and detectives Ryan and Esposito all wind up in Elvis impersonator costumes for plot-related reasons. Not quite as cringe-inducing, but it's still played for comedy.

And none of this is what Elvis actually means to me. None of it touches on Elvis' music.

Now, mind you, I have never actually seen a real live Elvis impersonator perform either. Part of me would be a bit afraid to do so, on the grounds that I'd keep expecting too much emphasis on Elvis-like mannerisms and not enough on actual musical talent.

But there's also the simple matter that I like 50's and 60's era Elvis way more than I do 70's era. The Elvis music I listen to over and over and over again comes from those eras. I'll absolutely break out 70's era stuff every so often—the Aloha Via Satellite concert album is still hugely important to me, as is the live performance of "Let Me Be There" that is one of the earliest Elvis concert tracks my dad ever played for me—but it's the simpler stuff that appeals to me most. The simple 50's-era rock, and the best soundtracks from his movies as well—like King Creole's soundtrack, which crackles from start to finish, and which contains what I consider Elessir's theme song: "Trouble".


Or the sweeter, simpler ballads from movies like Wild in the Country (which I do passingly reference in Faerie Blood), Follow That Dream (which has a lovely little song called "Angel" in it), or Kid Galahad (which has "Home Is Where the Heart Is", which I can actually play on guitar).

And to this day, I have yet to hear of an Elvis impersonator that does young Elvis. Show me one of those, and I might actually consider going to listen to him! (Or her! I do not require my Elvis impersonators to actually be the same gender he was. And if you'd like an idea of how a woman could sound like Elvis, go listen to recordings by his very own daughter. I've heard clips. Lisa Marie sings spookily like her dad.)

All of which swings me back around to Elessir. Something y'all should keep in mind about this boy is, his Elvis affectation, as much as from anything else, is because he likes screwing with the minds of mortals. This boy is Unseelie, after all, and the fey have a long and venerable history of being ready, willing, and able to do exactly that. A big part of him likes to imitate Elvis simply because he knows it screws with humans' heads.

But the part of him he doesn't often show to anybody, the part of him that actually responds to human music in ways the rest of the Unseelie Court looks down on, is drawn to simpler stuff. Elvis singing a simple love ballad with a guitar type stuff. Big, gaudy spectacle like what Elvis did with his concerts in the 70's doesn't impress Elessir. But what will get his attention is the heart and feeling behind a performance—the kind of heart and feeling that made a young Elvis Presley's singing first capture my young ears. The kind of music that in the Unseelie Court, as imagined by me, is a rare and precious gift.

It's the same kind of heart and feeling that has since drawn me to Great Big Sea and Newfoundland music--and much more recently, to Quebecois trad. The kind of powerful joy that comes from being in a session, in a house full of people making music, is exactly what draws Elessir in.

So no, Elessir won't ever put on a jumpsuit or a scarf. He'll be the Elvis impersonator who wears a denim jacket and jeans, with the collar of his shirt turned up behind his neck.

He'll be the one who needs no more instrumentation than a single guitar, and who can enthrall an entire bar just by singing about wild country roses. Hell, if you're an Elvis fan like me, you already know that Elvis was perfectly capable of doing that, and he was a mortal.

But never make the mistake of underestimating Elessir just because of what human he happens to resemble. Because he isn't human. He is born of the Unseelie, a bard and mage, a son of midnight and frost.

And when he unleashes the full strength of his singing, he can call down lightning.

--
Angela writes as both Angela Highland and Angela Korra'ti, and when she's not hanging out with Quebecois fiddle players, she writes fantasy novels with Unseelie Elvis impersonators. Follow her on angelahighland.com or her Facebook page! Or come tell her your favorite Elvis movie on Twitter.