When Was the Last Time

Posted by: Unknown
Romance shouldn’t end with an exchange of rings. After the wedding comes the honeymoon. Usually. Not everyone spends three days in a U-Haul driving from Pennsylvania to Texas. Some people get tropical vacations. You know, romance (side-eyes husband). Then most of us settle into the rest of our lives.

That’s basically what happens to Paul and Evan in my novella When Was the Last Time. They meet, fall in love and set out to journey through life together. They buy their forever house, plan and complete some renovations, and enjoy Sundays on the couch in front of the game, a bowl of pretzels between them. They haven’t fallen out of love. They’ve simply fallen into that comfortable place a couple often finds themselves in after fifteen years together. It’s a great place. I happen to love it.

But what happens when that comfortable place becomes complacent? When intimacy slips between the couch cushions and gets lost with that old hairbrush and a handful of coins?

How do you get back to that honeymoon stage—without the U-Haul?

Well, you don’t, not exactly. That’s new love. What you have after fifteen years is a deeper love. A changed love. That means finding your way to a new kind of intimacy—and it can’t be easy, or I wouldn’t have a story to write!

In the following excerpt from When Was the Last Time, Paul has tried to make dinner for Evan. He burned the salmon and his hand and set off the smoke alarm. He’s frazzled and a little depressed by the fact his first attempt to rekindle the romance between him and his partner has failed dismally.

They didn’t talk while Evan cleaned and dressed his hand. Evan appeared absorbed by his task, and Paul had a permanent lump blocking his throat. His thoughts shifted from worrying over the state of his relationship to a more selfish purpose—his emotional fragility. He felt weary, drawn, and breakable. How had one comment from Evan, at breakfast no less, sent him into such a tailspin?
Maybe he simply needed to connect with Evan physically. Stop thinking and just do.

He stood and followed Evan to where they stowed the first-aid kit, preparing to hug him from behind. Nibble on his neck, the lobe of his ear. Breathe across the fine hairs there until they stood on end. He’d grind forward, thrust into the waiting curve of Evan’s ass. Tell him he loved him, needed him, desired him. That he needed to fuck him, right now.

Who said romance always needed to be sweet?

Evan turned, suddenly, and their heads smacked together, right at the temple. Thick darkness followed bright light as large black blobs swallowed the stars dancing in front of Paul’s eyes. Distantly, he heard a soft curse and a bark of laughter.

“Jesus. Paul…. Hey. Sit. Wow….” Evan guided him back to one of the tall stools by the narrow island in the middle of their kitchen. “What were you doing right behind me?”

It was either laugh or cry. Paul chose laughter. It hurt. His head pounded with each chuckle, and the kitchen grew brighter and dimmer, as if he were a faulty circuit. That thought only had him laughing harder. Louder.

Beside him Evan smiled and chuckled. Even laughed a couple of times. He sobered when Paul touched the distinct red mark at his temple.

Evan took his fingers and kissed them. “I know you are.”

Paul tugged on Evan’s hand until their faces were level and leaned forward to kiss the mouth he loved beyond all reason. The angle was awkward. Before their lips touched, their noses collided. Persisting in his purpose, Paul lifted his chin… and hesitated as a ripple of uncertainty pushed through him. No, not now. He wasn’t going to try and remember the last time he’d kissed Evan properly and with heat. Breathing in, he captured Evan’s full lips. The taste he could never forget invaded his senses. Evan, Evan, Evan! His lover’s name chased away such things as memory and regret.

Relinquishing one lip, he sucked on the other, the fuller, lower one. He nipped and tugged. Evan’s surprised outward breath tickled. Smiling, Paul dove in again, deepening their connection. He invited Evan’s tongue out to play, and they chased each other through the warm enclosure of their mouths, sighing, gasping, murmuring softly.

The alarm over their heads bleated once, the sound small and petulant, but it was enough to break the spell. Looking up, Paul noted the light blinking in the center.

Evan looked up too, afternoon stubble scraping gently across Paul’s lips as he did so. “Good thing the battery lasted long enough for you to burn dinner,” he said. “Otherwise I might have come home to find our beautiful kitchen destroyed.”

He meant it as a joke, but the words felt sharp. They both knew it was unlikely Paul would have burned down the kitchen. Yes, he was absentminded. But while he might have choked on smoke before setting fire to their kitchen, Evan had unwittingly pointed out the fault that had let their relationship burn down to a banked ember: His distraction. His preoccupation. His assumption that the world would continue to turn around and beneath him while he pursued his career.

Evan looked back down from the ceiling, surprise making his eyes wide. Then he smiled. “I know you do.”

So why didn’t he say it back? 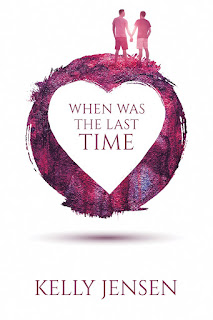 When Was the Last Time

Paul Summerfield is stunned by the gentle reminder it has been over a year since he and his partner, Evan, have made love. He vows to take Evan out for Valentine’s Day. Dinner and sex. Lots of sex. There’s only one catch—he’s supposed to be in San Francisco that week cataloging the art collection of an important new client. No problem, he’ll just change his schedule and cut his trip short by a day.

In San Francisco, Paul struggles with regrets and the fear his love is slipping away from him. Every call to Evan seems only to prove the distance between them is increasing. All this, and a key piece of his client’s catalog is caught up in customs. To keep their Valentine’s date, Paul will have to choose between the career he’s built over fifteen years and the man he’s loved for just as long.

If aliens ever do land on Earth, Kelly will not be prepared, despite having read over a hundred stories of the apocalypse. Still, she will pack her precious books into a box and carry them with her as she strives to survive. It’s what bibliophiles do.

Kelly is the author of a number of novels, novellas and short stories, including the Chaos Station series, co-written with Jenn Burke. At lot of what she writes is speculative in nature, but sometimes it’s just about a guy losing his socks and/or burning dinner. Because life isn’t all conquering aliens and mountain peaks. Sometimes finding a happy ever after is all the adventure we need.