Posted by: Unknown
Combining science fiction with romance might seem like a stretch to some. To the writers and readers of this growing genre, it’s a natural extension of both stories, however. To me, science fiction is often the essence of human fiction. By setting our stories in far flung worlds and pitting our heroes and heroines against inscrutable aliens, we’re holding up a mirror of a sort. We’re showing what it means to be human, to be dreamers and explorers. Why not show what it is to be lovers as well?

In writing the Chaos Station series, Jenn and I endeavored to do just that. Saving the galaxy is all and good if you’re the hero type (born or made). But saving your own heart came sometimes be the more difficult trial.

I’d like to share an excerpt from our upcoming release, Inversion Point (Chaos Station #4). Zed and Felix are on hand to greet the resonance, the fourth species to arrive at the Galactic Hub. It’s a big deal, especially as Zed is the only person able to communicate with them. Unfortunately, he and Felix aren’t communicating that well right now, which is fairly typical—not only for our boys, but for life in general.

Life, and love, doesn’t sit on pause while we save the galaxy. It has to be dealt with at the same time. Combining these elements can make for a richer and more satisfying story, don’t you think?

“I’m really not the best guy to take to this party.”

“And Theo is already going to be there. Ambassador means representative, remember? He is humanity, as far as Central is concerned. Can’t go anywhere without Theodor Paredes.”

Had he only imagined Zed inserting the word fucking in between Theodor and Paredes? He sensed Zed didn’t like the guy, but couldn’t put his finger exactly on why. He couldn’t still be upset over the palm-reading thing, could he? Wasn’t like Felix had said “Here, fondle my hand.” It had been innocent. Mostly. On his part, anyway.

“He’s a good guy, Zed. Honestly, the fact he is the ambassador kind of blows me away. It’s like humanity did something right for a change. Theo is honest and compassionate. He cares about people. He wanted to be a soldier for all the right reasons.”

“If you’re such a fan, you should be looking forward to the party then.”

“What is your problem with Theo?”

“Could have fooled me. Every time his name comes up, you look like you’ve tasted Gagorian tubers. Is it because he’s an ex?”

“No.” But the flicker of tension along Zed’s jaw said yes.

“You know what ex means, right?”

Zed didn’t answer for a moment. Then he spoke quietly, his tone at odds with the tension snapping through the air. “What happened with you two? Why did you break up?”

Felix shook his head, but Zed held his gaze, apparently determined to have his answer. Exhaling, Felix gave him what he was looking for. “I ended it before training finished because I didn’t want someone else to leave me behind.”

Zed winced. Then, he had the gall to ask: “Did you love him?”

“Did you love Riley?”

“She must have thought so to think you were up for a marriage proposal.”

Felix turned away, dismissing a conversation that would take them nowhere useful.

“Are you coming to the party or not?”

“I didn’t think I was being given a choice.”

A sigh. “Just get a shower and meet me back at the suite at 1800. We need to get you measured if we’re going to requisition something for you to wear in time.”

“I already know what size I am. Should be in my profile.” He had put on some weight over the past few months, though, making most of his pants a little tight around the waist. But agreeing to be measured felt like giving in.

“We’re not ordering your suit from Mercenaries ’R Us.”

Felix pressed his palms to his eyes. “Do I seriously have to wear a suit?”

The snick of the hatch sliding closed after Zed’s abrupt departure was sadly undramatic. Letting his hands drop to his sides again, Felix eyed his kick bag, but no rage answered his call. Instead, a sick swirl moved through his middle—an emotion he couldn’t, or didn’t want to identify. 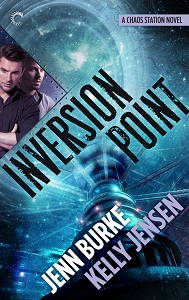 Zander and Felix’s relationship has been to the brink and back: the Human-Stin War, imprisonment and an actual death/resurrection. Zander’s death, to be specific, and the experience has left him…changed. The mysterious race known as the Guardians chose to revive him and appointed him as their emissary. A high honor, but he could do without the group of would-be cultists following him around the galaxy.

When a recently discovered species destroys a stin probe, Zander’s new role soon commands all of his time and focus. The human ambassador—Felix’s ex-lover, much to Zander’s annoyance—pulls them into strategy talks aimed at preserving galactic peace. Soon everyone is relying on Zander’s Guardian tech to telepathically communicate with the strange aliens.

Only Felix seems concerned with the strain piling up on Zander, but he has his own resolve tested when the very stin that imprisoned him show up to a summit. Zander and Felix will both have to find a way to face their doubts and preserve their love—while preventing another galaxy-wide war.

=+=+=+=+=+=+=+=+=+=+=+=+=
Like free stories? We’re sending one out to our newsletter subscribers next week. “Reunion” is the second of a two part series we began with "Graduation" to tell the story of Zed and Felix’s relationship prior to the events of Chaos Station.

To sign up, follow this link, or visit our website where you can also check out the books of the Chaos Station series and a host of other extras.