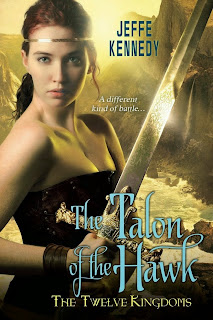 When I first saw this amazing cover, I felt an actual, physical chill.

It was everything I could have hoped for - my warrior princess's thousand-yard stare, the golden glow and a great big freaking sword.

I was so thrilled, I called in my guy, David, and bounced happily as I showed him. He said, "there's no way she could swing a sword that big."

Oh, yeah - that annoyed me no end.

I should caveat at this point and say that David is a wonderful man. We've been together nearly 25 years and there's a reason I always put him in my Acknowledgements as the one who makes everything possible. He's a nurturing person, fair-minded and always supportive of everything I do. He also studied Kung Fu alongside me for 15 years and has decidedly strong opinions on the topic of what women fighters can and cannot do.

Which is all fair enough. A lot of Ursula's perspective on fighting and training is informed by those same considerations. I have a pretty good idea of what I can and can't do physically, especially if confronted by a male opponent.

Except this is fiction. And yes, I did tartly ask, "Does it help to know she's not fully human?"

Of course he backpedaled and felt bad for raining on my cover parade. He also doesn't read my books - or really any fiction - and I'm good with that. I also forgave him because I know that what he said was his knee-jerk, programmed response and not how he came to think about it after some discussion.

But it's salient that this is so culturally ingrained in us. We see male action heroes accomplishing the impossible ALL THE TIME. We expect it. Of course Indiana Jones can outrun a boulder despite all laws of physics! Can David Banner become a giant green monster that busts all clothing except his short pants? Why yes! Can Bruce Wayne pour bucket loads of money into technology to make himself a superhero with no supernatural abilities? SAVE US, BATMAN!!

Sure, we can pick apart the ways that our disbelief isn't *entirely* suspended. The Hulk's pants, right? Still, I'd lay money down that David would not have looked at a cover with a man holding a great big sword and immediately assessed whether he thought the guy could swing it. Because men are completely accustomed to fantasizing themselves as superheroes. Which usually includes saving the beautiful princess and winning her body, if not her love.

In this case, I wanted the fantasy of the superheroine. She's not screaming shrilly waiting for Indy to come save her. She's supernaturally fast and strong.

She has a big freaking sword and she knows how to use it.

The Talon of the Hawk

A HEAVY CROWN
Three daughters were born to High King Uorsin, in place of the son he wanted. The youngest, lovely and sweet. The middle, pretty and subtle, with an air of magic. And the eldest, the Heir. A girl grudgingly honed to leadership, not beauty, to bear the sword and honor of the king.
Ursula’s loyalty is as ingrained as her straight warrior’s spine. She protects the peace of the Twelve Kingdoms with sweat and blood, her sisters from threats far and near. And she protects her father to prove her worth. But she never imagined her loyalty would become an open question on palace grounds. That her father would receive her with a foreign witch at one side and a hireling captain at the other-that soldiers would look on her as a woman, not as a warrior. She also never expected to decide the destiny of her sisters, of her people, of the Twelve Kingdoms and the Thirteenth. Not with her father still on the throne and war in the air. But the choice is before her. And the Heir must lead…