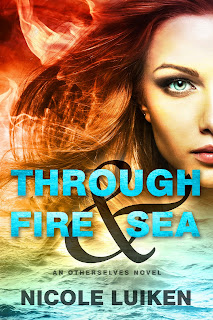 Interviewer: Welcome! I have here with me today two characters from the YA fantasy novel Through Fire & Sea. Although Gideon and Ryan are otherselves, I understand that you shift into different creatures. Gideon, you can shift into a dragon, am I correct?

Interviewer: And Ryan, you can shift into a merman?

Ryan: I prefer siren. I don’t have a green fish tail, or gills and I don’t carry a trident or a horn. Your picture is ridiculous.

Interviewer: Noted. So boys, the topic is which is better dragons or sirens. Take it away!

Ryan: (crosses arms) This is going to be short. Being a siren sucks so we both vote dragon. The end.

Gideon: (clears throat): I disagree. I’m not entirely sure what a siren is—I gather you don’t mean an alarm?—but it must be better than being a dragon.

Ryan: (clenches teeth) Sirens are called that because their voices have the special ability to persuade people, and they were often accused of luring sailors to their doom. Which I’ve never done. I bet the sailors just fell overboard in a bad storm. But anyhow, the point is, sirens have a bad rap, whereas everyone thinks dragons are cool.

Gideon: Dragons have a reputation for cruelty and viciousness. They’re known to spit fire and burn up entire villages. Dragons are shot at on sight.

Ryan: Dragons are powerful. They get respect. And you have built-in armour. Definitely cool.

Gideon: Dragons are hot-blooded. They are never cool.

Ryan: I meant—never mind. Look, being a siren sucks. I have to be careful all the time not to accidently command people to obey me. Do you know how icky it is to wonder if the girl you just asked out said yes because she actually likes you or because you accidently charmed her? Thank God Holly is resistant to my voice. She’s the only one I can relax around. Being a siren, constantly having that temptation to tamper with people and make them do what you want… It’s not good for a person. I struggle all the time.

Ryan: I think my siren powers drove my mother mad.

Gideon: My mother chained me in a cave until I was twelve.

Ryan: (points to Gideon) Okay, you win. Being a dragon is worse than being a siren.

Interviewer: Okay, that was a little… unexpected. One last question before we go. Ryan, what’s one thing you do like about being a siren?

Ryan: Swimming in the ocean. I mean everyone can swim in the ocean, but I can go for miles in my siren form and not worry about drowning. And surfing with dolphins is pretty cool.

Interviewer: Gideon, how about you? Is there something you do like about being a dragon?

Gideon: Flying. It’s… The wind on my face, flowing under my wings, banking and turning and diving… I love it.

Interviewer: And that’s the end of our interview for today! If you readers have any questions about dragons, sirens, or Through Fire & Sea please ask!